‘Hey, this is Maya, the tour manager of Giant Rooks.’
Suddenly my mumbled ‘Hello’ feels so wrong. My ‘Good morning’ has the same effect. Why? I’m still in bed, and it’s nearly two in the afternoon.
Yeah – wrong time, wrong place.

Fours years ago I met the singer Fred for a chat and today it’s time for interview number two with the Giant Rooks. I’m just finishing the questions on the train, then I’ll take a walk around Reeperbahn and look to what the night will bring! The sun is shining and a quick cup of coffee gives me some energy!

But enough about me. Giant Rooks are playing Hamburger Stadtpark tonight, the weather is perfect and the guys from Berlin (formerly Hamm) are ready for the interview. So here we go! 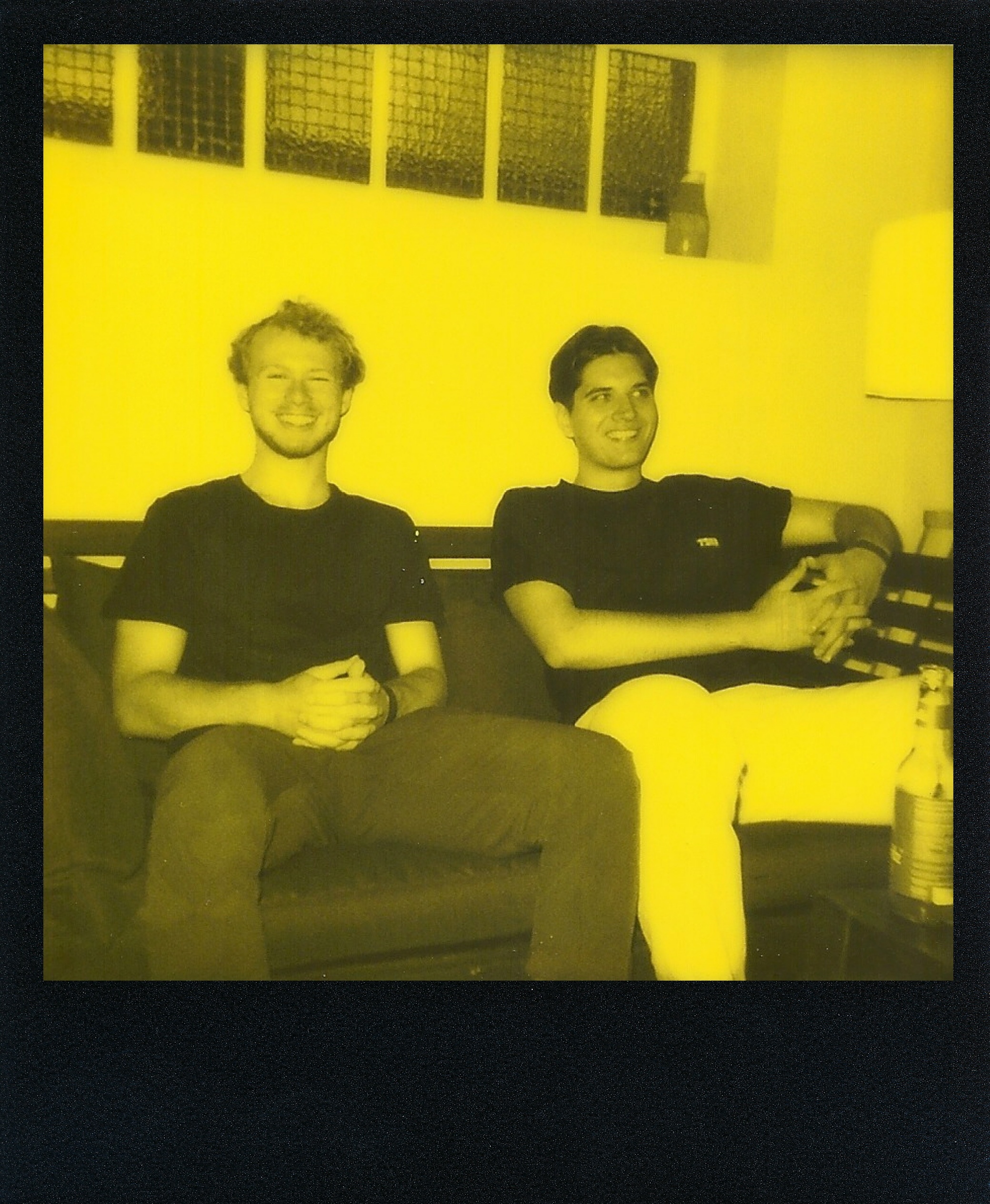 Finn and Luca from Giant Rooks.

Let’s get to the core – Star Wars or Star Trek?
Luca (speaks to Finn): Guess that’s your one!
Finn: Star Wars.
Luca: I agree! Finn knows every character, or am I wrong?
Finn: There aren’t that many characters, so …
The important ones are pretty compressed.
Finn: Yes, that’s it. The other ones are always just the same. The storm troopers (everybody laughs).

To keep it personal!
How did the Corona situation affect you?
What did you miss the most?
Luca: Most of all, to be spontaneous. In Berlin you can just go out. See a concert, go to a bar, whatever. The simple life I guess. Knowing you can just stay home, that was hard. Wasn’t easy to deal with that.
Finn: Same for me. Social stuff, I really missed that. Especially in the beginning. It’s gotten better with time, so that we were finally able to meet people again. But yeah, stuff like concerts, playing football …
Luca: To have a beer …
Finn: Yeah, that was missing.

Let’s get to the Giant Rooks

And as a band?
How was that? After all you needed to delay your Rookery tour.
Luca: Yeah, especially the Rookery tour. The first tour with the new record. But there was also the support tour with Milky Chance in America. That one needed to be delayed as well. We were already doing the rehearsals, when we’ve got the call. Yeah, alright, it’s not gonna happen.That was really hard. We were really looking forward to stuff like that. But on the other side we’ve got time for ourselves and we used that time to write new songs. So that’s the other side of the coin.

Again your debut, Rookery.
I like to think about the song All We Are. And when I think of that one, Wenn es passiert from Wir sind Helden comes into my mind.
To get to the question – what’s so romantic about the end of the world?
Luca: Oah – that’s a good one! To be fair, our guitarist Finn writes most of the lyrics. He and Fred think a lot about that stuff. There is a lot of it to find on Rookery, like social and political issues. Everything that matters to young people, like we are. Climate change, mental health, we felt the importance to talk about stuff like that. 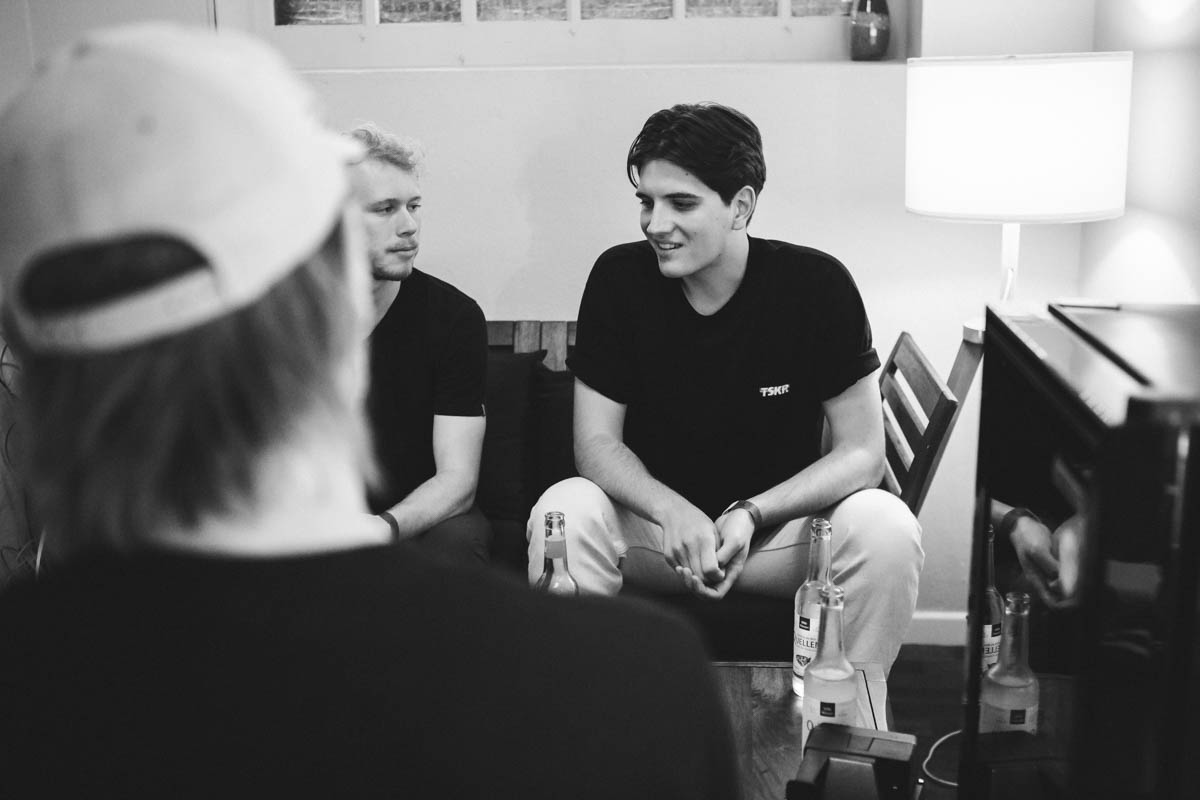 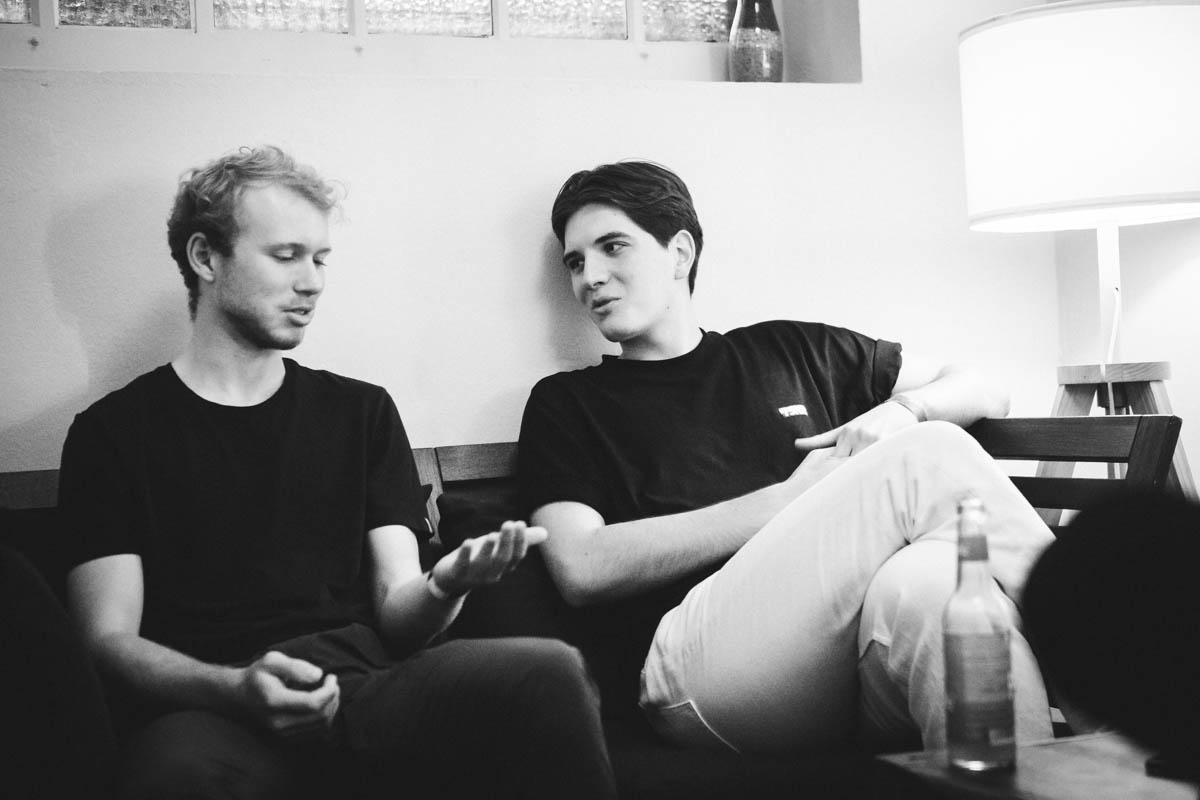 Luca: But why’s the world ending so fascinating? That’s kind of tough. To keep it simple, it’s like a yearning, to answer in a dystopian way: In a world, where there are so many crises and so much unrighteousness, maybe that’s like a way out – okay, the end of the world. And maybe you’ll feel better after that. Still, it’s a dystopian answer. But it’s definitely on our minds sometimes.
Finn: Or maybe in general, when you’re saying that it’s often a topic in lyrics: Somehow it does make sense, that there’s a romantic note, when you’re talking about the world ending, no matter how terrible it might be. It’s over then. The way it ends, what do you do then. I don’t know how to describe it, but in a way I understand that feeling. It’s some kind of beautiful.

The world’s ending – what would you do?
Luca: I guess I’d put on Kings Of Leons Because Of The Times. And then I’d grab my best friends and my family to listen to it one last time. A bit sad right now (laughs).
Actually that sounds sick! It’s a good record, isn’t it?
Luca: Yes, but if we look at it in context with the world’s end ‘the last thing you’d do’ … that’s actually sad! But something like that, yeah!
Finn: Can I be there as well?
Luca: You’ll definitely be invited! (everyone’s laughing) 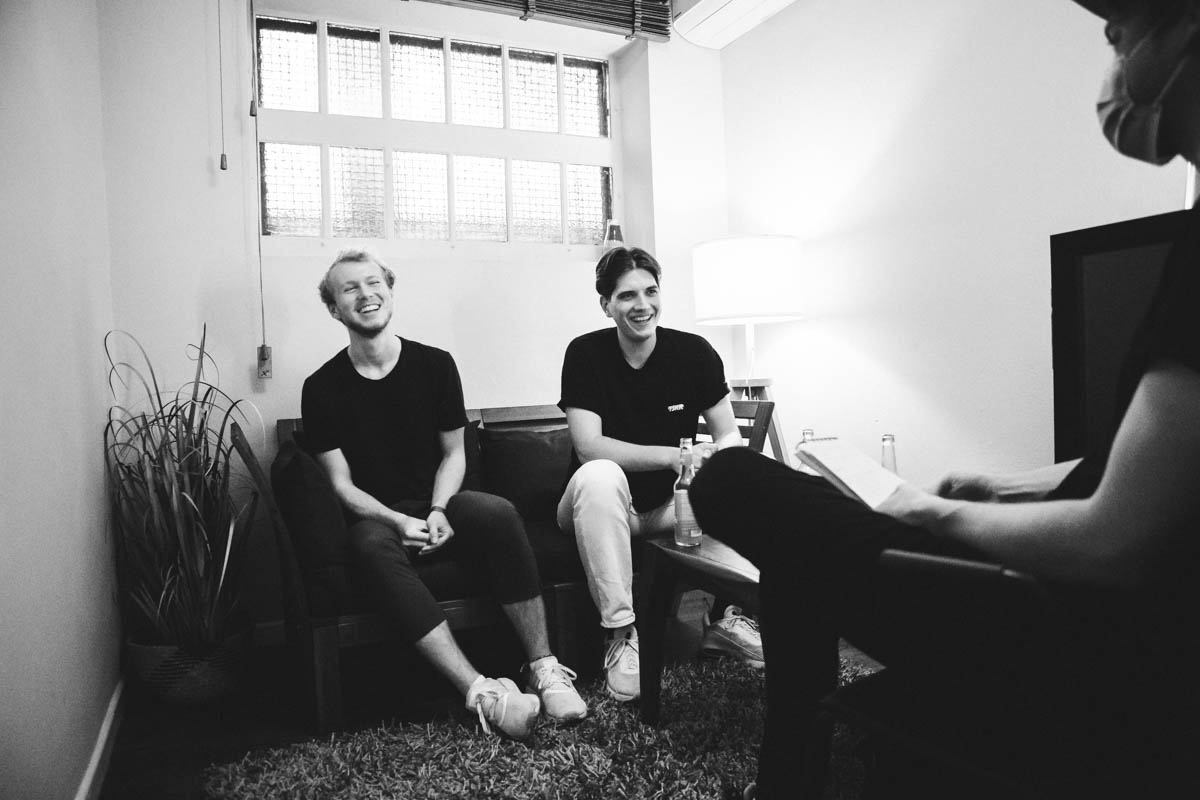 New music’s the matter!
When it comes to new music, how do you handle the pressure from other people, like your fans?
Finn: The most pressure comes from ourselves. We love to keep on developing, write new songs, release new music, but it still needs to be good. We need to feel it that way. So we can look back in a few years and can say: ‘Yeah, that’s still awesome!’ In my opinion we did exactly that until now. And it should stay that way.

So it’s not really pressure from other people. It’s more like we want to keep our standard of good music. We need to like it and we should like it in the future. Something to be proud of.
Luca: Definitely! Especially talking about our debut, Rookery, that took so much time. Because we wanted to do so. It took us some years and we’re so proud about the fact that we finally released it last year. But now’s the question: What comes next? Finn said the right things about pressure and stuff.

Are there songs that you play live and then they like, disappear?
Both: Yeees.
Luca: All right. For example: There are songs we played at our first concert and we still do so. But when you release new music, you want to play these songs! Even if it’s sad, that’s why some olders songs eventually disappear. But yeah, it’s more fun to play the new ones!
Finn: Think about new songs, which aren’t even released: Once played live doesn’t mean they stay that way. Doesn’t matter if it’s the music or the lyrics, afterwards we often change them so much …

Your music was played at the famous German TV-show Tatort.
Luca: Hamburg episode actually!
There’s a moment, when Wotan Wilke Möhring takes off the headphones and says: ‘Quite nice, isn’t it’?
What would you like to reply?
Finn: You’d better put the headphones back on! (Again everyones laughs)
Luca: Or – Wotan, we play Stadtpark tonight, come round! 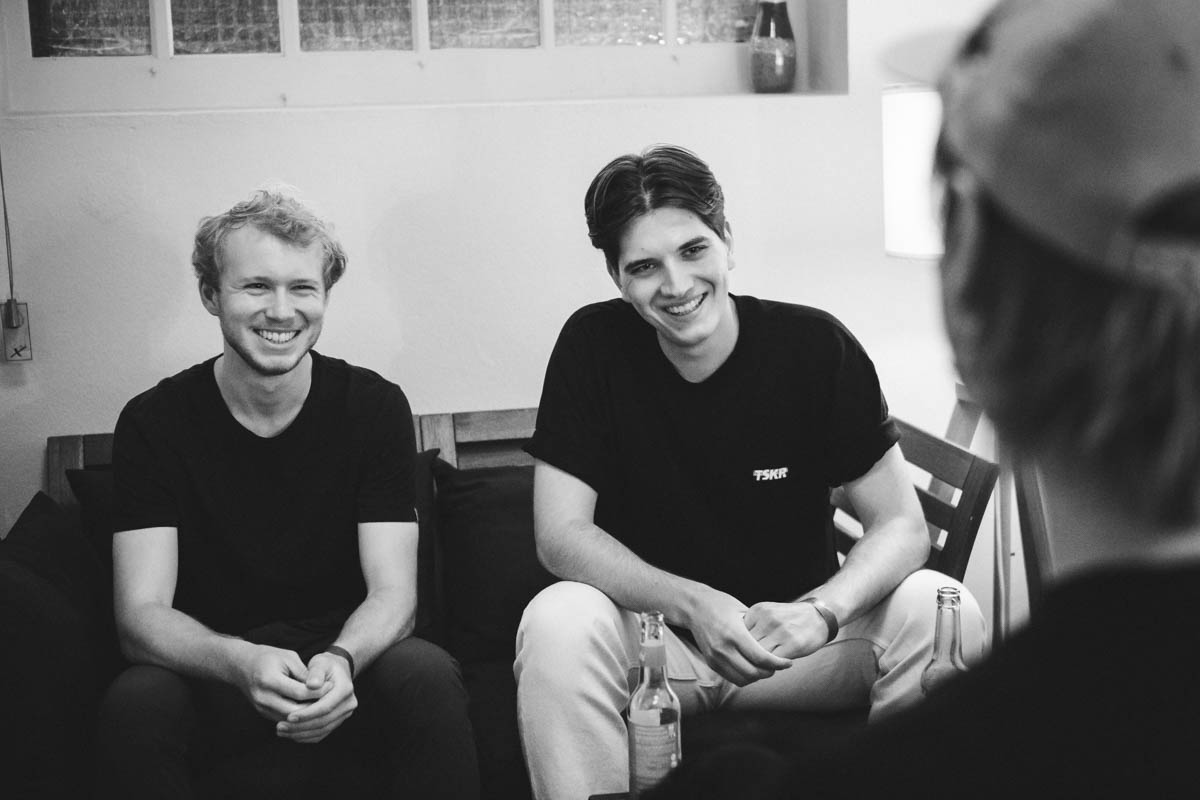 In 2017 you played Nochtspeicher and did a cover of Dylan.
Last week Charlie Watts died.
Which Stones song would you like to play in his honour?
Finn: That’s a surprise! But we already did that before. There’s a little joke hidden in our set, so if you listen pretty well, you can find it. Sad to say the joke turned into a homage.

Bonus question:
As a band, your most exciting first time?
Luca: At first I need to say in the different stadiums we went through, there was always that one moment. But I think, the most memorable one was Great Escape.
Finn: Yeah, I’d have said the same.
Luca: That was in 2017. Our first festival abroad and then straight Great Escape! Legendary one, in Brighton. We were there for the full weekend, played two shows, yeah, that was incredible for us as a band. We had so many beautiful moments. We spent the whole night at the beach and when the sun started to rise, we were still there. We kept that memory with us.
Sick!
Luca: Yes, that was wicked! 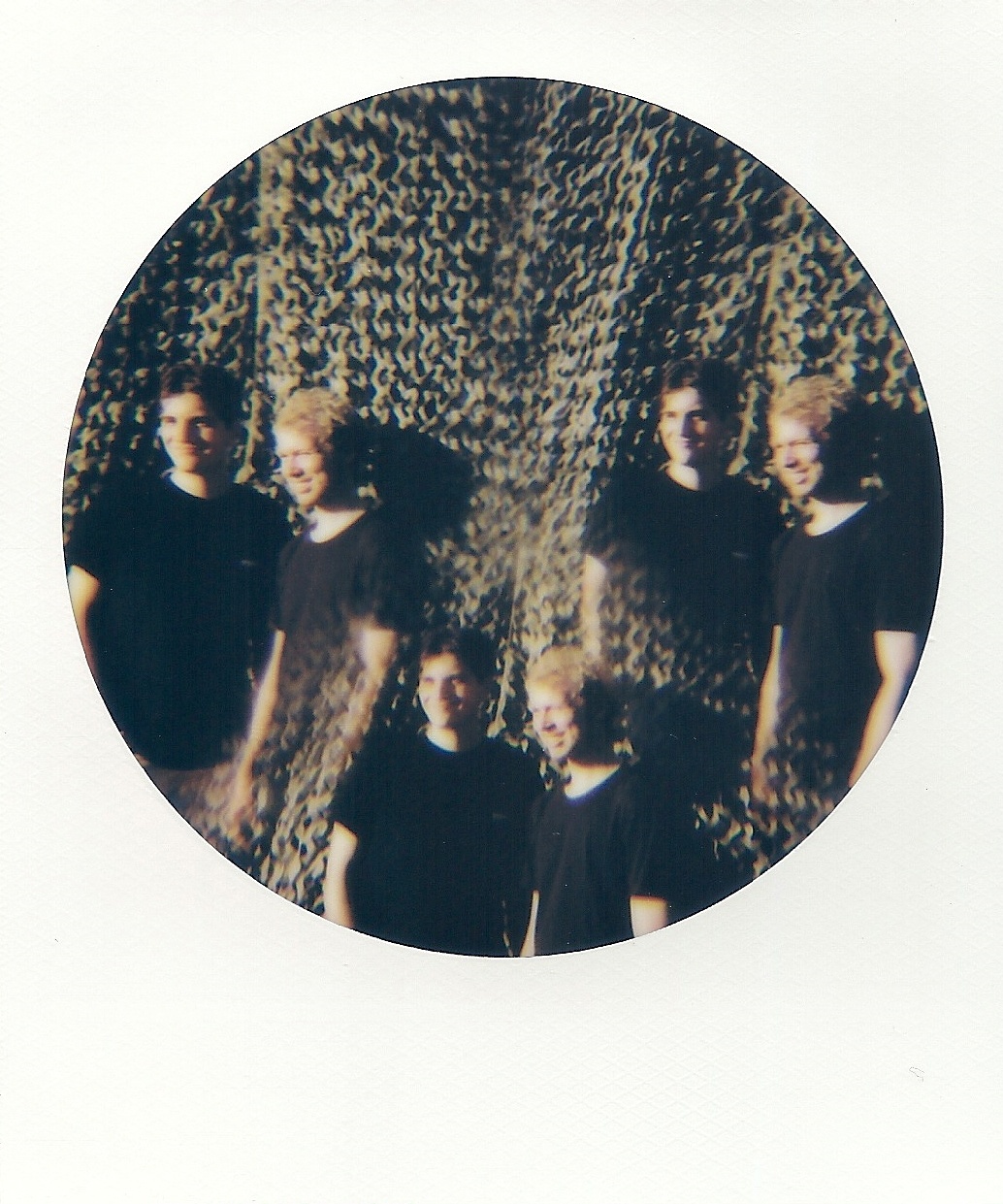 Right after the interview, we take some pictures and Finn & Luca are saying goodbye. We sit down in the warm sunlight, and Katrin already starts to work on a picture. I’m just enjoying the moment: A flame is dying, smoke is rising, ah – back in the game. A real interview, live music and summer seems to back for one last time.

Live music is back

The following concert is just a blast. There’s no support, just the Giant Rooks. The Rooks, wine, smoke and lights are forming the perfect combination for a great night out. The Birth Of Worlds, Heat Up, with every song it gets better and more intense. Thanks to Luca for the song I’ve lost and eventually recover that night: 100 mg. It took three years! Are you waiting, are you waiting?

It’s getting dark and the first stars are appearing in the sky. An amazing setting for what’s left to come. Very Soon You’ll See at the Stadtpark is such a gift, we are singing and we don’t know: Why the hell we’re here together? We dance, we applaud, we sing and sometimes just listen to the music. The Plough levitates over our heads, as the band starts to play All Good Things (Come To An End). The Big Dipper, the lights, the audience levitates – why do all good things come to an end? There are songs from the New Estate-EP and there’s All We Are. Well done guys! Take my hand. A night to fall in love (with). 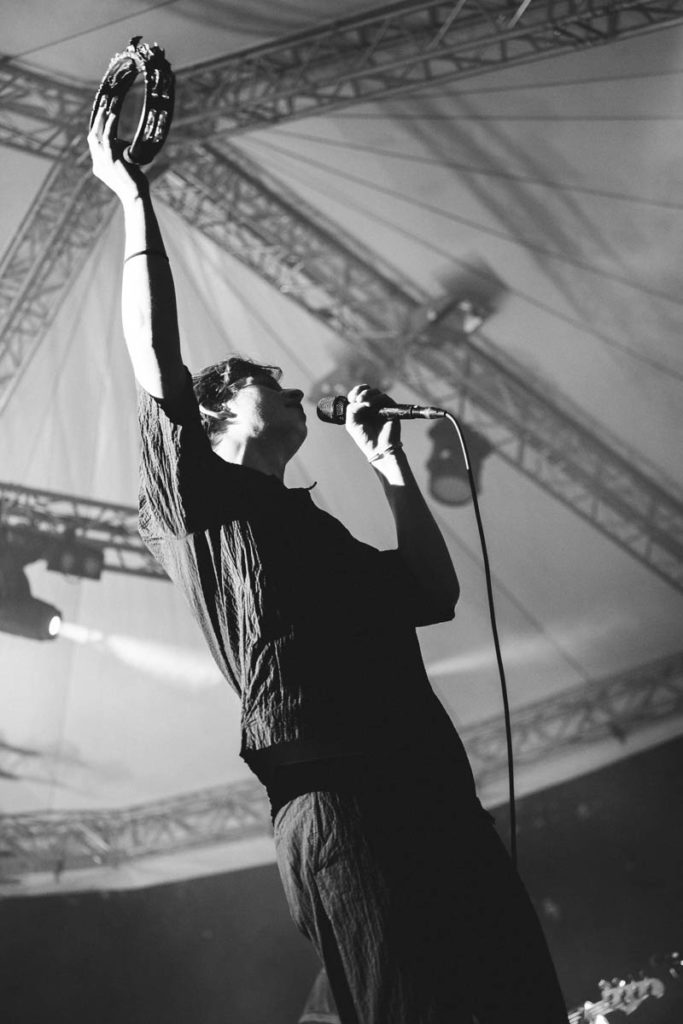 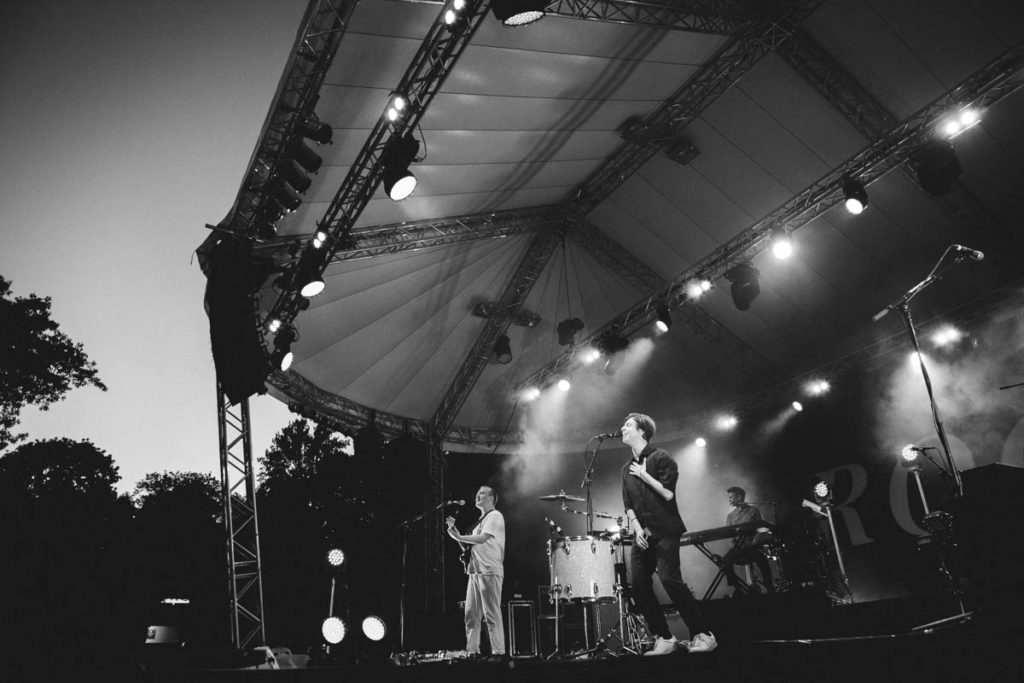 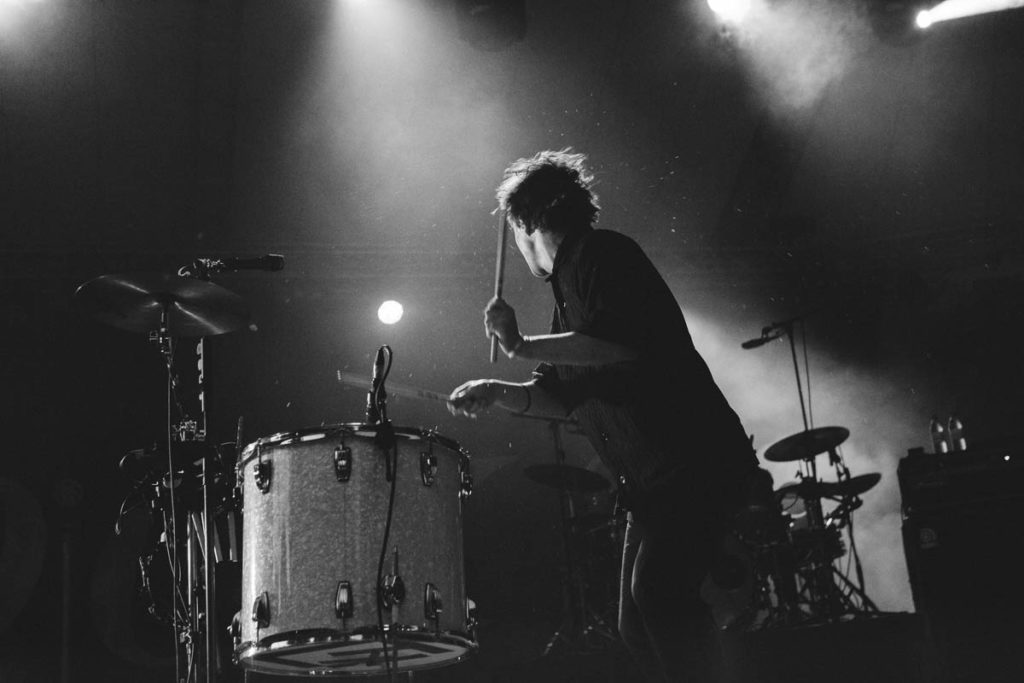 Yes, I’ve been out again.
Thanks to the Giant Rooks for that wonderful night out. Thanks to the Messed! Up Magazine for the opportunity, especially Jimi and Katrin, who’s responsible for the great pictures from that night. Except the Polaroid pictures, ’cause I’m not just babbling.

Text, interview & Polaroid pictures: René Biernath
Thanks to Katrin (Baroquine Photography) for the beautiful pictures!
Instant Film: Color, Round Frame Edition; Black & Yellow, Duochrome Edition, both For Use With 600

More Rock ’n’ Roll: One night with L.A. Salami or a song about mortality