A dance with: Broncho

That’s one part of the dance I had with Ryan from the fantastic band called Broncho. When we met in the beginning of October I had no idea that after our lovely chat and the following awesome concert it would take me so long to type down the interview. No more delay, here we go and say hello to my favourite man from Oklahoma:

Just to know whom I’m dealing with:
It’s Star Wars or Star Trek?
Star Wars for sure. But the older I get, the more I get into Star Trek. Yeah I grew up on Star Wars and I totally connect with Star Wars in a lot of ways. But there is something that is starting to be real fun about Star Trek:
Star Trek use a lot of things from science. Science pulled a lot of things from Star Trek. Different people who work for NASA, who work for space programs said: ‘We actually got this idea from this episode of Star Trek when they did’, you know … So there is some of that stuff going on, that’s fun about Star Trek, that got me going. But I’m a Star Wars kid.

“There’s no contempt.
There’s only acceptance and love
and communication.”

When I gave this a second thought, the following question came into my mind:
Do you or the people in your band actually believe in something like god?
No. Not like a traditional god I guess. I think we all just don’t know. If I were to speak for everybody I think that we all maybe agree on the fact that none of us know. Does that make sense?
Oh, it’s alright!
I can go back and forth on whether this was very natural, the earth sprang life and life turned into humans. I can also get to the fact like that some alien race came and started putting people places. I don’t know (laughs)! It could be anything! And I wouldn’t be shocked. Whatever it is. I’ll be shocked if it were the traditional version of god. That would shock.

The last time you were in Hamburg, was back in 2017.
Easy one, what do you like about Hamburg?
Let me remember. There is the kind of canal, right? And there is some submarines over there. I like that. It seems wilder than the other cities that get credit for being wild. I think Hamburg is actually wild. It’s usually the places that aren’t necessarily promoting it, they end up being the wildest. Now that I’m here I can see there is a lot of wild promotion going on. But on the outside I’m hearing more about other cities who are wild and then you get here and you are like: ‘Ah Hamburg’s the party city!’

The place we were playing with Queens Of The Stone Age, if I remember that correctly, was like a large gym, kind of an arena, but small.
The Sporthalle.
I like that place. I remember that show. And that night was really fun, it was a cozy place. And that’s big, but on that tour we were playing places that were like 20.000 people some nights.
So that was small.
That was small, kind of cozy and like: ‘Uuuh, I like this’! But still like 8.000 people, but it felt smaller, it was a fun night. 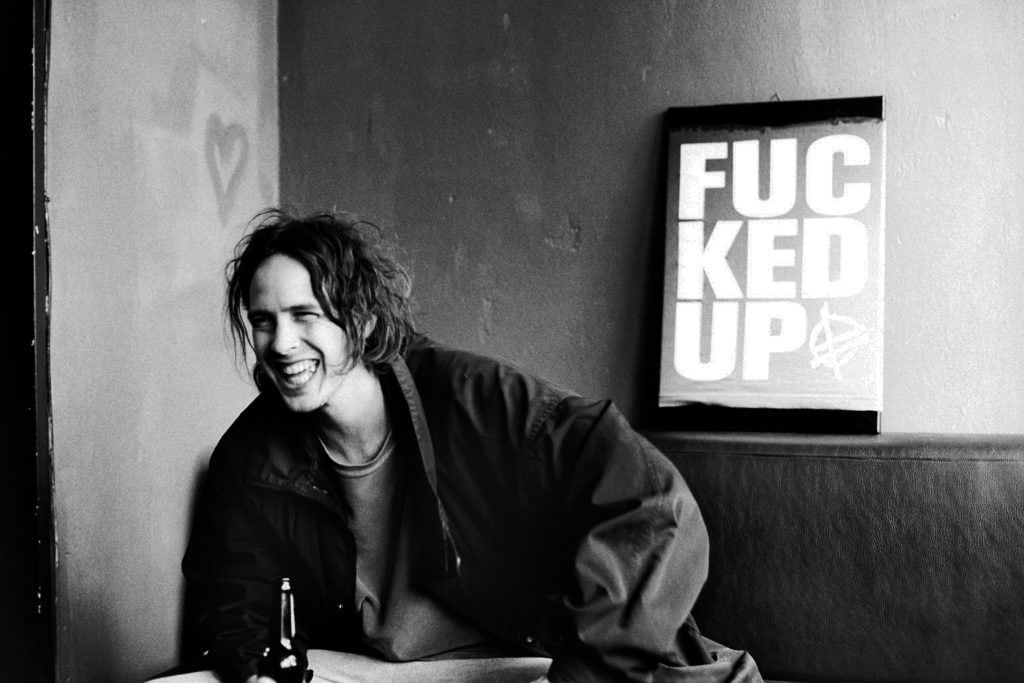 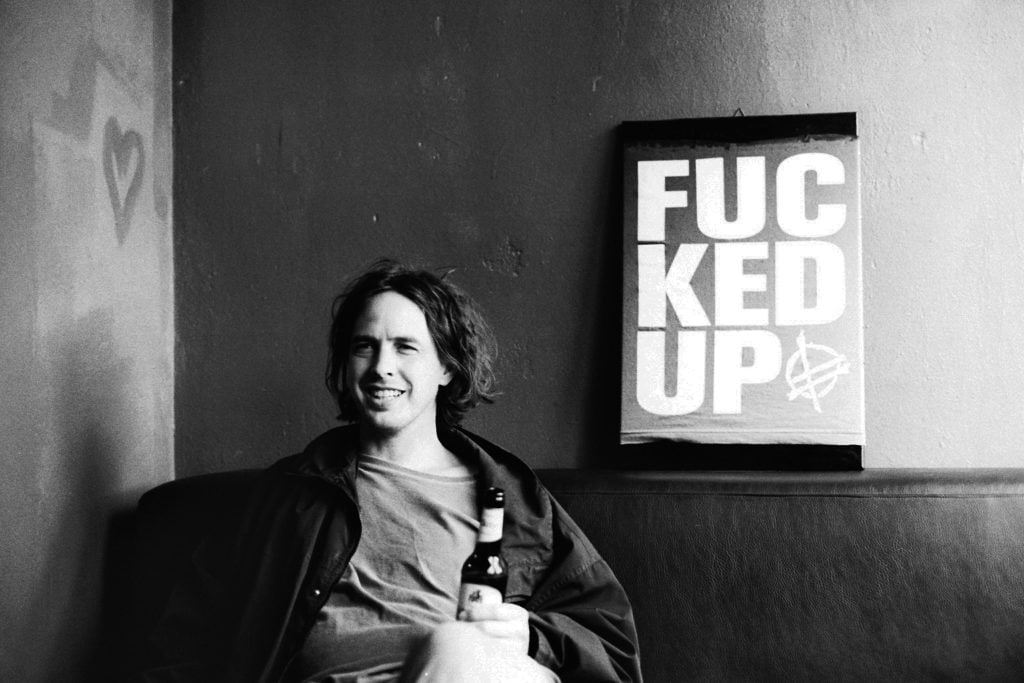 Referring to your song Get In My Car.
Whom would you like to get in your car?
Hmm, I guess I never thought about that!
Anybody that wants to ride.

There’s one lucky person in the audience, who won the chance to be on the guestlist tonight. So I thought I might give him a shot as well:
He wants to know how did you guys get together as a band and how and where was your first gig ever?
First gig ever was in my living room.
So how was it?
It was great, all my friends were confused, but it seemed they had fun, I had fun. Our second show was at that place called Crystal Pistol and it was one of my favourite shows. It was like in the back of this bar, it has that big tall ceiling and it was all just black. And then there was kind of a bunch of junk overflow from the bar, which is a friends bar. He collects bunches of junk and I’d love that, like: Oh, If I had room for keepening it all. My mom once talked about good trash, so I got it from her. So thats what I loved about this place and he always has the best trash. That was our first real show outside of the residence. I like that shop. So that’s how we started.

So you guys just met?
We played in different bands together. We played in other bands before Broncho. I was like writing these songs, demoing and then everybody else turned out being in the band was hearing them. I was sending them to them. We were all kind of playing in different bands at the same time. So they’d just happened to be there, listening to the stuff and then before we knew it, we just started booking shows.
Oh really? That’s amazing!
Yeah, everything happened very easily in the beginning. We started playing shows and then people be like: ‘Come play Lawrence!’  Maybe somebody had a friend there: ‘You guys can play here.’ We had friends who booked us shows in St. Louis and then Chicago, we booked our own show there. We started going up, played Dallas, Austin, yeah, Kansas City, St. Louis, Chicago and then from there you kind of like just started cruising around.
One thing led to another …
Yeah, it just kind of happened! We didn’t have to do too much in lifting. It was nice, it just kind of took place.

Last Friday you played with Kings Of Leon and I guess it was huge! Now you’re playing a small place like the Molotow.
Doesn’t this feel a bit weird?
We are all crazy, so it doesn’t matter. It just helps to stay crazy you know (smirks)?
How was the gig?
It was great!
And how did that happen?
Well, they opened up this new park in Oklahoma City. And the city was like: Lets put up a show, lets get Kings of Leon. And then they asked us, if we want to play as well. It sort of kind just happened. We have mutual friends with them, so there’s been some connection in some way or another with them for a second. Maybe we are gonna do a tour at one point or we’re gonna try to do a tour.

It felt like we were getting asked to play with them. I didn’t even realize it was a city thing. I thought they asked us to play and I thought that was great! And I was really happy like: ‘Alright!’ And then I found out: ‘Oh, it’s a city thing. Okay, at least we are playing with them.’ So it was good. I have always been a fan of theirs. They are Oklahoma boys. So yeah it was good to play a show with them. 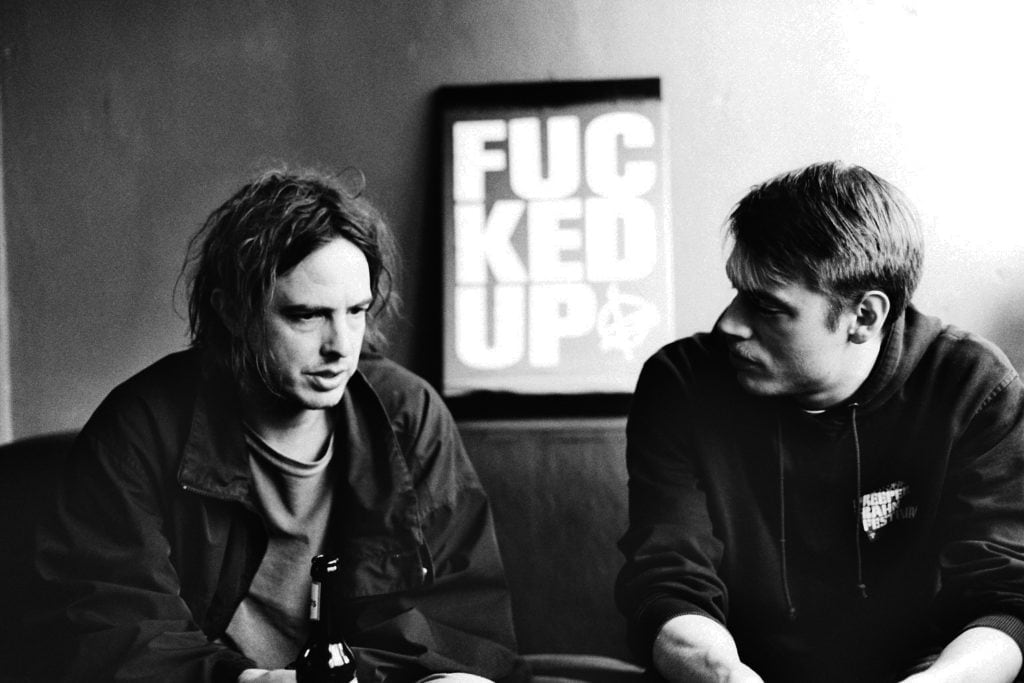 A few days ago I read an interview and the musician in there said that Rock ‘n’ Roll is dead.
What do you think about this?
Well, it’s dead to a lot of people. I think there are a lot of other things getting the limelight. So maybe Rock ‘n’ Roll changed. I dont think it’s dead, I think that’s a fun thing to say you know because it’s like: ‘It’s fucking dead!’

Because it’s maybe not what it was. There are certainly other things, there are a lot other things who are their own version of Rock ‘n’ Roll that aren’t necessary traditionally the genre of Rock. But there are people expressing their point of view of whats going on culturally like the way Rock ‘n’ roll initially did. But in a different way, kind of a way people say thats Punk, that’s Rock ‘n’ Roll or whatever.

It can be an attitude, it doesn’t necessarily have to be the genre, but it can be an emotion. and I still think that’s the vibe. Well there’s just other things that are getting alike now. You know, there’s a lot of women who are getting huge in their genre. Certain things get bigger, some other things have to step back. So that’s just something I think it happens and it is good for there to be a change. Cause ultimately culture needs to change it up a little bit so you just go with it and keep doing what you do. Certainly a lot of people love Rock ‘n’ Roll but it’s probably different than it was like …
Maybe the 80s, early 90s …
Yeah it’s a little bit like sports. Like here football is soccer you know. It’s big here so all your best athlets play that. And it’s not as good in the US because all the athlets are playing other sports and so it’s just a change. I guess it depends on if everybody was all doing this it probably would be bigger. But everybody is getting into other things.

And then there’s possibly now with the internet, there’s more avenues for different things, there’s so much more. It’s not like there is just one highway that everybody is gonna go and take. There’s infinite amount of highways now. More people travel certain highways and other highways. And some highways aren’t getting used at all. And sometimes that’s good. Sometimes it’s like a bad way to go so let’s quit using that highway. And there are some highways people are starting to use again, that we thought we shut down. We thought they were shut down: We shut down this highway and now people are using it again?! Like in politics you know, there is a certain level of hate that is starting to spring up again that I thought maybe was over with, but its starting to happen again. There is good and bad with our highway system. 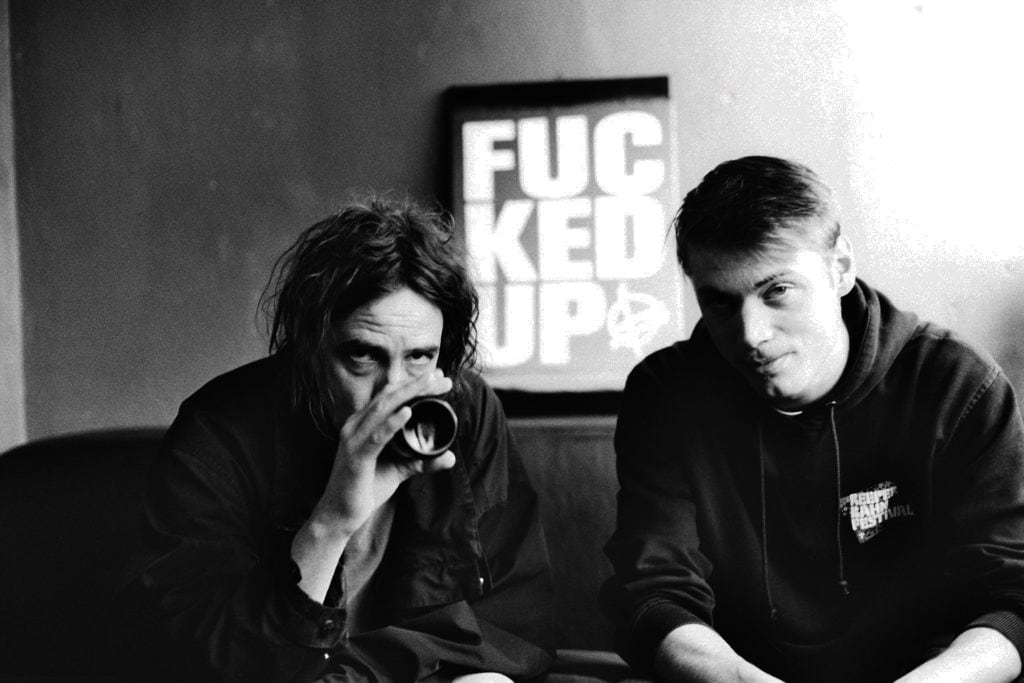 That was a nice chat and a good night that eventually led to some other amazing nights. Also thanks to Jonas for the beautiful pictures, been great to have you with me.
Broncho? See you next time!