Eject. Put in the tape. Close the deck – Click. Press Play.
And ‘Family Dinner’ embraces me. From the first moment on it leads me into a wild hurricane of sound. Drums. Guitar and more guitar. The hypnotic voice in between, which sings, whispers and shouts its way into my brain. This is wild and this is it! Next dish: ‘Ricochet’. Catchy right from the start, this song has nearly got everything you need. A great melody, screaming, shouting. Bang! Bang! Pause.

When I saw your first show tonight and as I checked out your record, which starts with Family Dinner, I did notice you are doing a lot of instrumental parts in your songs.
Maybe this makes you special as well …
Thomas: Could be. I think that was also by coincidence, because Robin didn’t want to sing.
Robin: I can sing, but I didn’t want to.
Thomas: We forced him to sing.
Robin: Now I’m okay with it, but in the beginning …
Jens: We just like his voice. There must be a singer and he was the best singer of the four of us.
Robin: I didn’t want to do it, but now I’m comfortable with it.
Jens: So that’s maybe why there are a lot of instrumental parts. But we were fortune to play a lot of festivals and to grow in our thing that we wanted to do. So that’s the thing you saw today. It was not from the beginning like that (laughs). The vibe was always there. That’s what we always wanted to do, like a wall of sound, not too much talking, just go for it! Like The Ramones.

Play. ‘Naughty’ still pushes forward, before SONS are inviting me to dance to ‘I Need A Gun’. And the next banger is just waiting around the corner. ‘White City’ is another explosion of sound, that makes it hard to keep still. It seems like war in my ears! But what’s that? Pause. Rewind. Click. ‘Skin’ is the first chance to catch a breath. Time for another throwback. Did I say: Maybe this makes you special as well? Ah, Yeah, we started the interview with another question …

There are a lot of bands on the radar. So what does make you special?
Robin: It’s a hard one! I don’t know. Okay: We play guitar music, Rock music. But we call ourselves or people call ours a Garage Punk band. I think what makes us special is there are a lot of influences from all the Rock scene. We really like the California scene that’s going on, with Ty Segall and Thee Oh Sees. Or King Gizzard and the Lizard Wizard, but not only that, also 80s stuff like Black Flag, Minor Threat. But also because he’s (Thomas) a really good Blues drummer, some 70s Hard Rock stuff Led Zeppelin, Black Sabbath, lot of influences from everything.
Everyone in the band is laughing: So special! 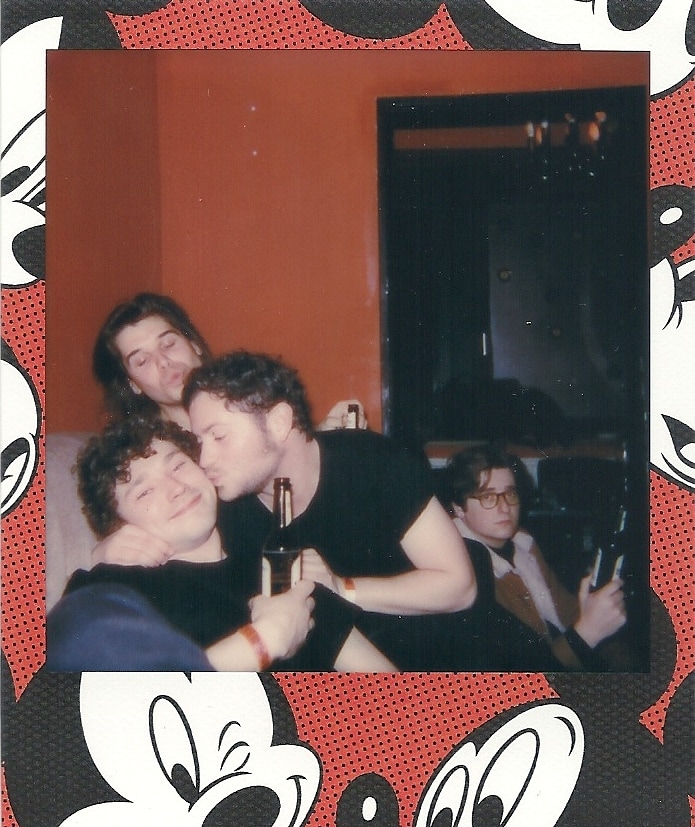 SONS backstage at the Molotow.

There was a contest

Arno: And I think we don’t take ourselves too serious. We started as four best buddies and then it went out great for us, but it was not our purpose to be a serious band.
Jens: We didn’t had a gig before we won this video contest.
Thomas: Actually we were nothing before it.
Robin: It is from Belgium and it’s a song contest. It’s really big in Belgium and you get a lot of exposure if you win it. You are selected out of 1000 bands or something like that. And if you win that you get a lot of airplay and stuff. So we were actually nothing before it. Just played like eight bar shows. When we won the contest we had a lot of shows coming up.
Thomas: As soon as we did the contest we did like 80 shows in a year. It went fast.
Arno: It’s not a thing like America’s Got Talent or something. It’s not like that. You just send in a song and then they pick three songs they like and those songs get airplay on Belgian radio.

But I mean it’s three songs – it’s not that bad!
Jens: It’s really a big thing! In Belgium it’s a big thing. So when you win that it opens a lot of doors to get for example to meet great people in the music scene and to play on nice festivals and to reach a lot of people. That’s what it did to us.

What is it called?
Jens: De Nieuwe Lichting! But we almost accidentally sent in our song, because we didn’t want to do it. And friends of ours said like ‘ Ah you have to do it, it can be played on the radio. And we were like ‘ Ah, no, that would never happen!’ And now we’re here to say it happened, so …

Time To Flip The Tape

Eject. Flip. Click. Play. With ‘Waiting On My Own’ I get suck back into the storm. And ‘Keep On Going’? Yeah, with that one I’m back in the fast game. Going wild in my head, before it seems that the storm begins to calm down with ‘Tube Spit’. Time for another memory …

You’re from Belgium.
No one has Belgium on the radar when it comes to Rock music.
It’s always Britain, maybe America.
Can you name some other interesting acts from your country?
Robin: dEUS. They are famous actually!
Jens: The Glücks also.
Thomas: I think in Belgium the Rock scene is really okay! It’s pretty big! In Belgium it’s the same like in every european country, Hip Hop and EDM is taking over a lot of the commercial stuff. But then, again, there are a lot of bands still. More than in the Netherlands I think.

As we are checking the other bands, the guys wrote down, I can’t hide my bafflement: Balthazar, Equal Idiots?! 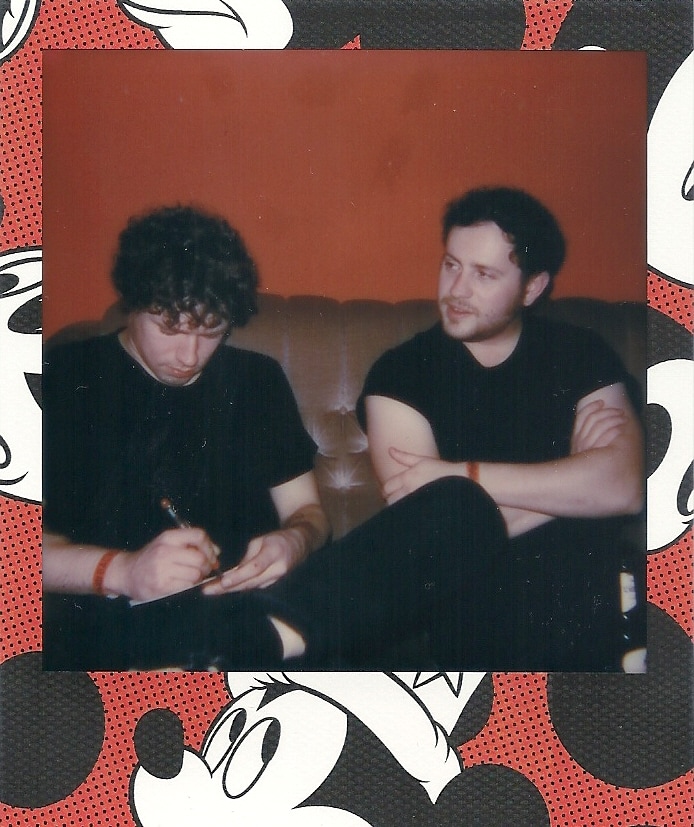 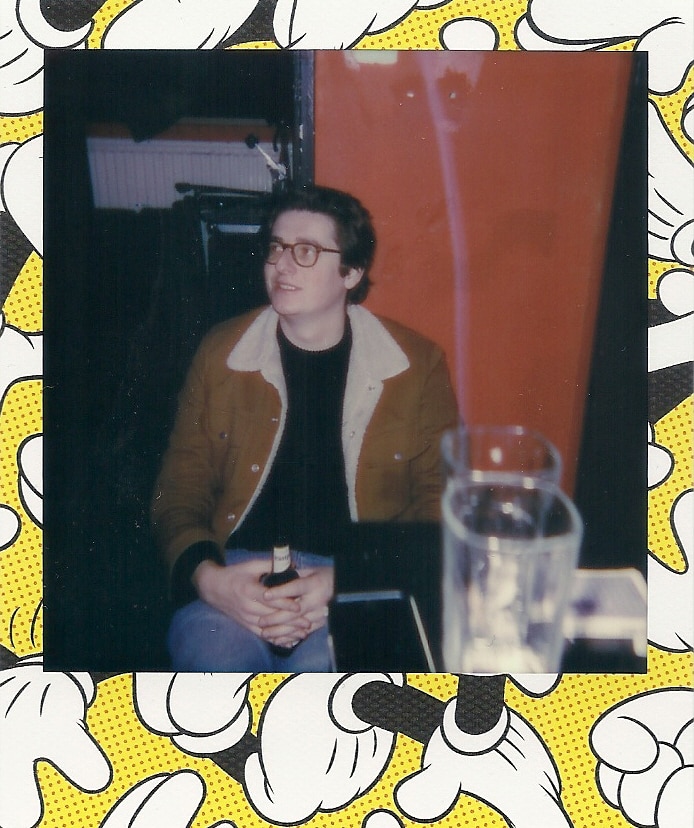 So today it’s the Molotow birthday bash.
As we talked about the contest:
Are you playing here ’cause you won it? Or did the Molotow invite you to play?
Jens: Actually to be honest, I have no idea. I know that our manager already played over here with another band. That was a lot of years ago.
Thomas: No, that has nothing to do with the contest.
Jens: The contest was just the song on the radio. It’s two years ago already.
Thomas: I think that’s why and two months ago, we got a German booker, I don’t know his name, we haven’t met him yet.

Ah Yeah, the birthday. The 29th birthday of the Molotow! And I’ve been there to do an interview with SONS and to shoot some photographs of their concert. And I couldn’t have done worse, the changing lights at the Skybar and zero experience in handling the camera … , but hey, at least I’ve tried! The band has been so relaxed when I met them backstage, while I’ve been still trying to figure out some questions. Bittersweet memories.

A question I’m always asking:
For SONS, it’s Star Wars or Star Trek?
Everyone: Star Wars! Absolutely no discussion!
Arno and Robin: But he (Jens) didn’t see any Star Wars movie ever.
Fuck off! (We all need to laugh)
Jens: I know Obi-Wan Kenobi.
You didn’t see it? Not even one movie?
Jens: I tried, but I fell asleep.
What the fuck?!
Thomas: Yeah, we always make fun of him, because he didn’t see it.

It’s funny that afterwards we were sharing the same experiences with older people preferring Star Trek because of the TV-series. But I think Star Trek deserves its fandom. What else did happen that night? We were trying to rediscover my first memories of the Molotow, failed, but I think I got them now. And of course there was the second show of SONS which took place at the main stage of the Molotow. War on the dancefloor. But there’s still a tape playing:

A last dance song comes with ‘Do They See Me’. It is the final extension of the storm called ‘Family Dinner’ which is coming to an end. The world seems calm again: Such a ‘Sneaky Snake’ …

Yeah, maybe I missed the chance to dig deeper into the SONS-universe, but at least now you know SONS. 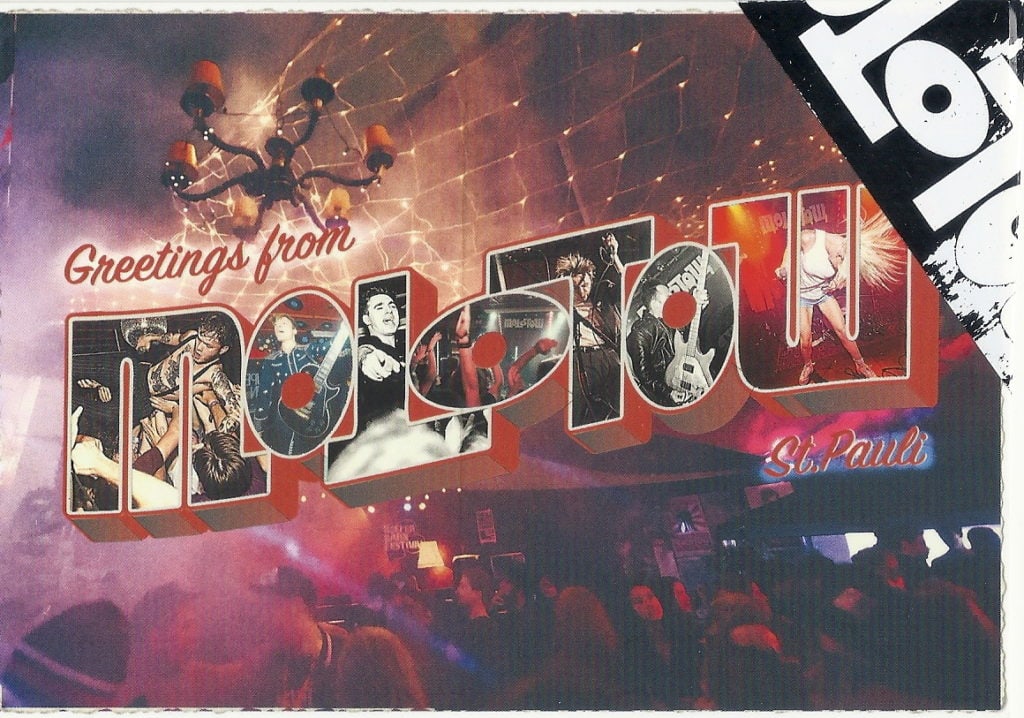 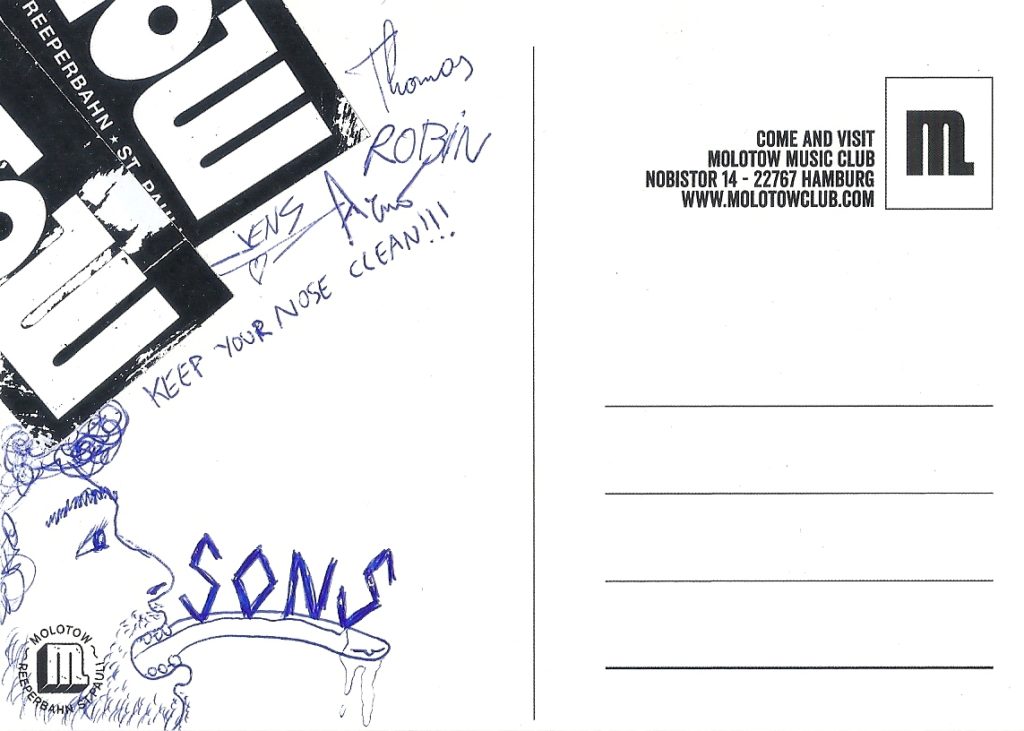