What it’s like to be in a rock band?
How amazing must it be to tour through different countries, hanging out with your band mates all the time?
Weren’t you ever wondering what’s life like in the tourbus, the green room or in privat of your favourite musicians?
I decided to check this out and my friends in Fizzy Blood allowed me to join them while the second leg of their very own headline tour through the UK …

I’m arriving at Leeds airport in the afternoon on Saturday, the 24th February. After a long night at the Molotow in Hamburg, and just a few hours of sleep, I’m getting the message that I need to make the way to Headrow House on my own, cause the band is stuck in traffic. No worries, I’ll do this! When I’m entering the venue, the band is still not there, so there is only place to be! The beer hall! Two beers and some worried thoughts later (am I right in here, maybe there are many places called Headrow House in Leeds?) I see Tim bumping in and man, how happy I am to meet him again!

All of a sudden, the adventure begins! Greeting the other guys, finally meeting my friend Paul again, getting to know Neil (the tour manager and driver this time), this all seems goddamn right! So we are beginning to unload the van, chat a bit and getting upstairs to build everything up. The Headrow House is a huge and nice place, but when we are getting in the concert-area, it’s pretty cold in there, thanks to the band and the crowd, it’ll get better later! While helping the guys with their stuff, I’m recognizing that Tim kept his nick from last years Reeperbahn Festival: Chesney Hawkes 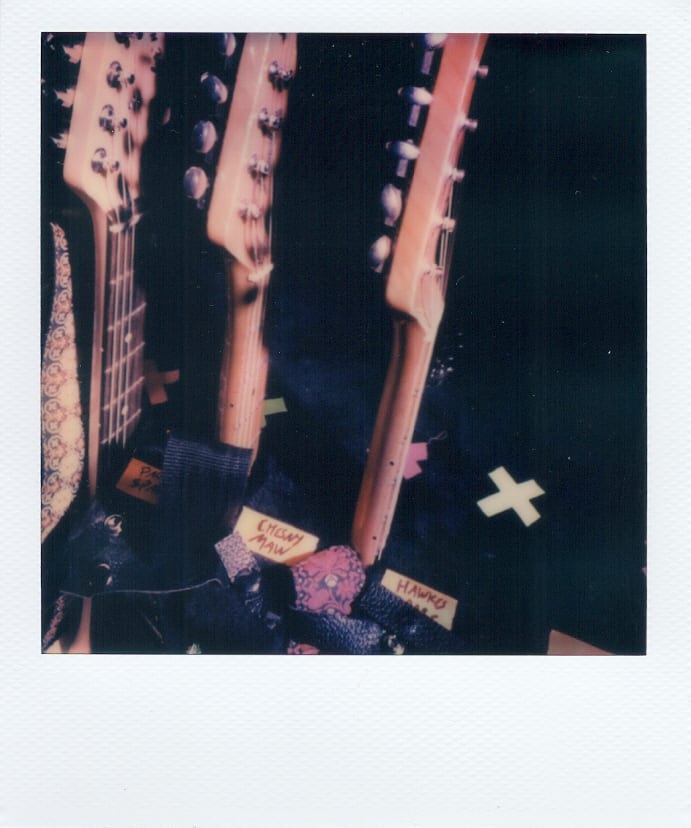 The one and only.

That’s awesome and I’m very proud to see that!

Soundcheck begins and wow, this is loud! Jake is smashing his drumkit like the devil and this is only the soundcheck! They are doing some of my favorite songs, for example ‘ADHD‘, and ‘Patience’, so I’m really looking forward to the gig later! 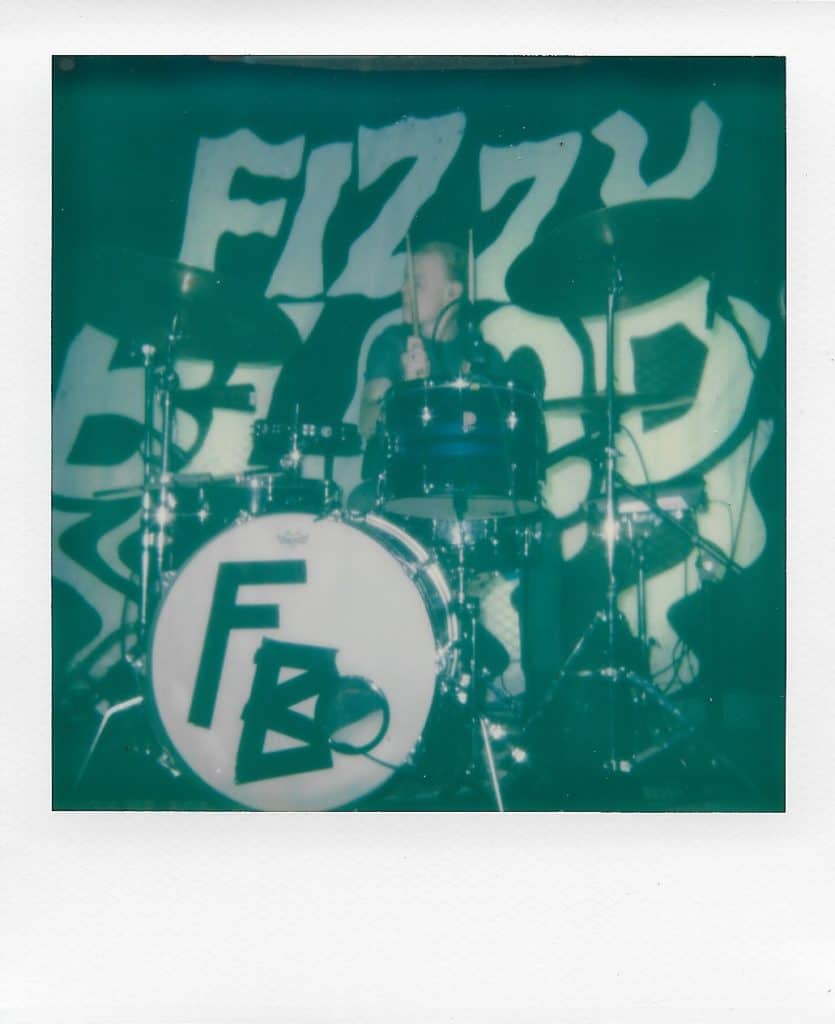 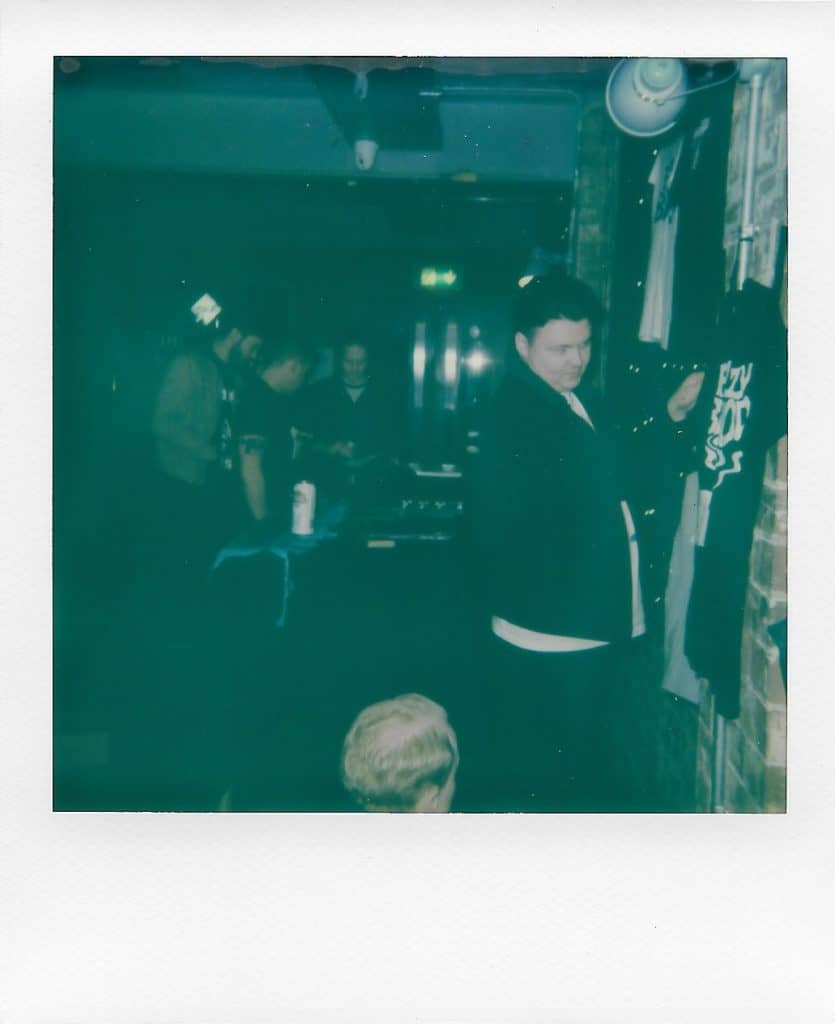 Preparing the merch, at the right: Benji

When setting up the merch is done, we are getting outside to have dinner at Taco Bell, just to get back to the venue immidiately. As a gift from the Headrow House (cause they sold that gig out), there is a bottle of red wine in the green room and Paul starts to pour everyone of us a little amount of it. One bottle of wine, 7 people, things are getting wild! 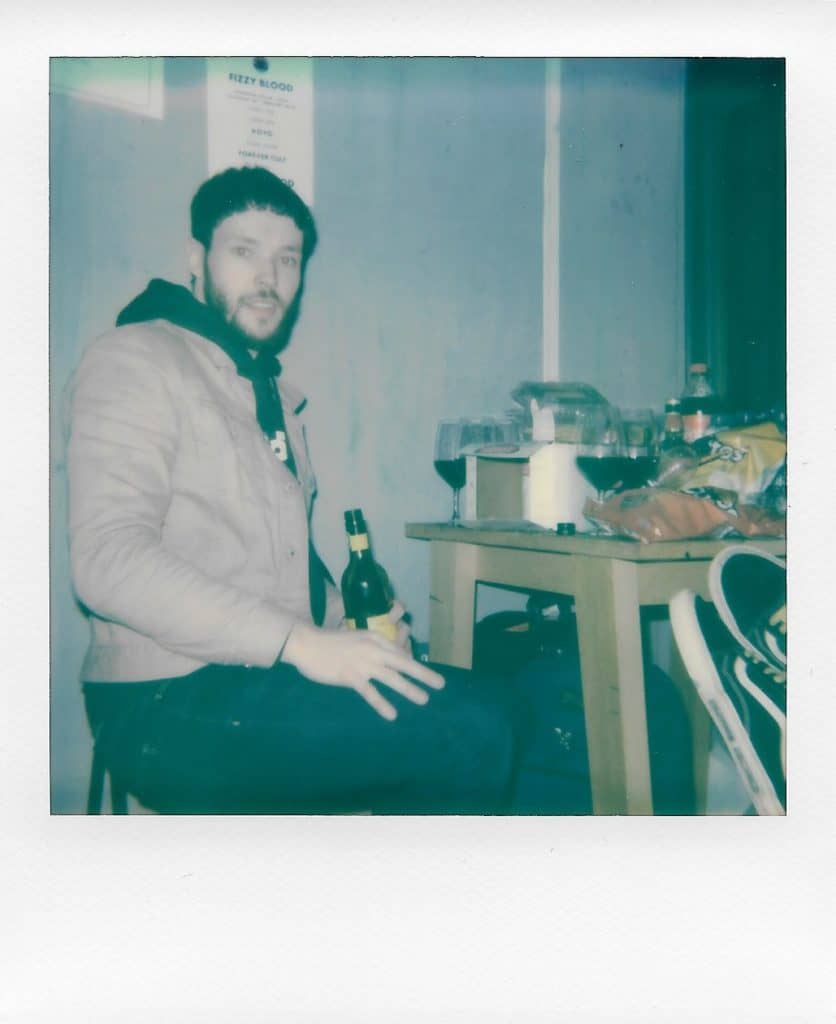 Like I said above, its sold out tonight with 150 people on the bill and after I get to know Benjis lovely parents, the concert starts! I’m missing the first support, see a bit of ‘Forever Cult’ (will talk a bit about them in my upcoming tour diary for the gig in Birmingham) and then it starts!
Fizzy Blood are climbing on the stage and are in the fucking mood!
The crowd really appreciate this and is going wild whilst the band is playing a really great set of songs. You can check the setlist right here!

Everything is coming to the boil with ‘January Sun’! And that is where it gets wicked! Moshing, shouting, jumping and the wild crowd partying like its the end of the gig. Of course it is and Benji is doing his best to push them further! He is turning his mic towards the crowd and a really passionate fan is grabbing it to shout the lyrics in! An awesome rock n roll move, the fact that he broke the mic stand is even more rock n roll!
What an outstanding gig!
The band is signing some stuff at the merch and suddenly we need to hurry up, cause we are instructed to get all the stuff out of the venue. When its done and we are really fast, we are starting to party around. A sold out show in your very own hometown? Hell yeah, lets drown some beers! 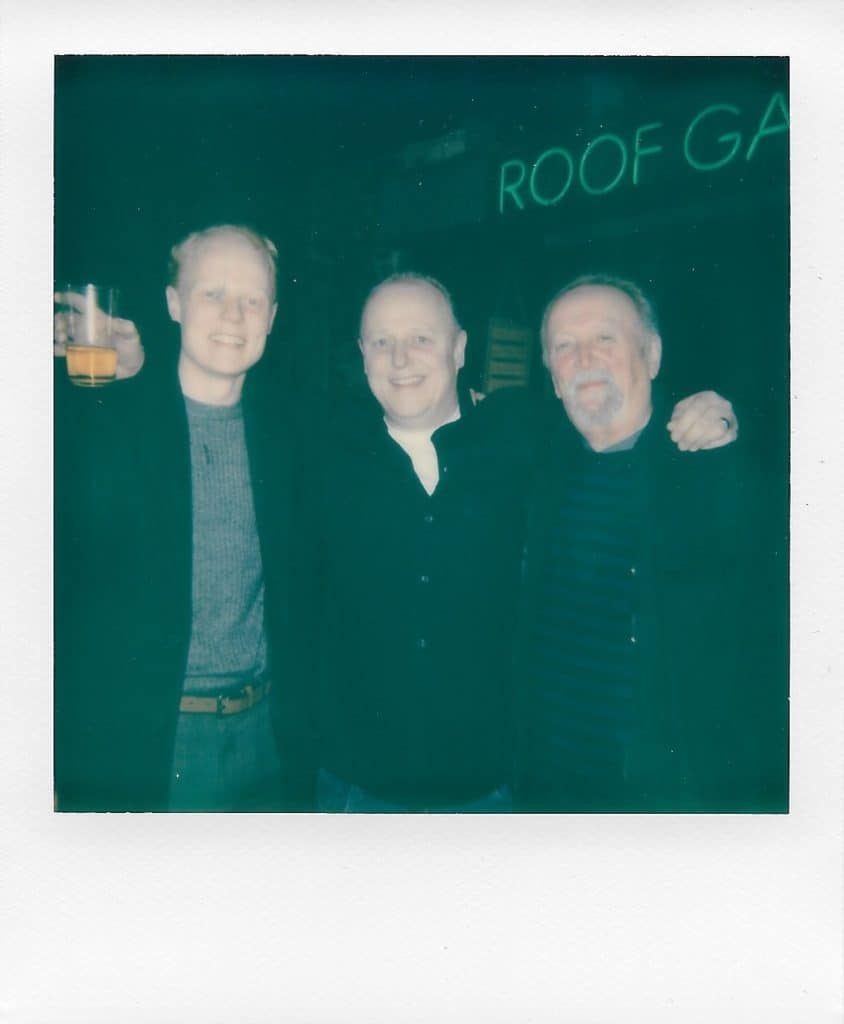 Soon On Netflix: Meet The Greenways 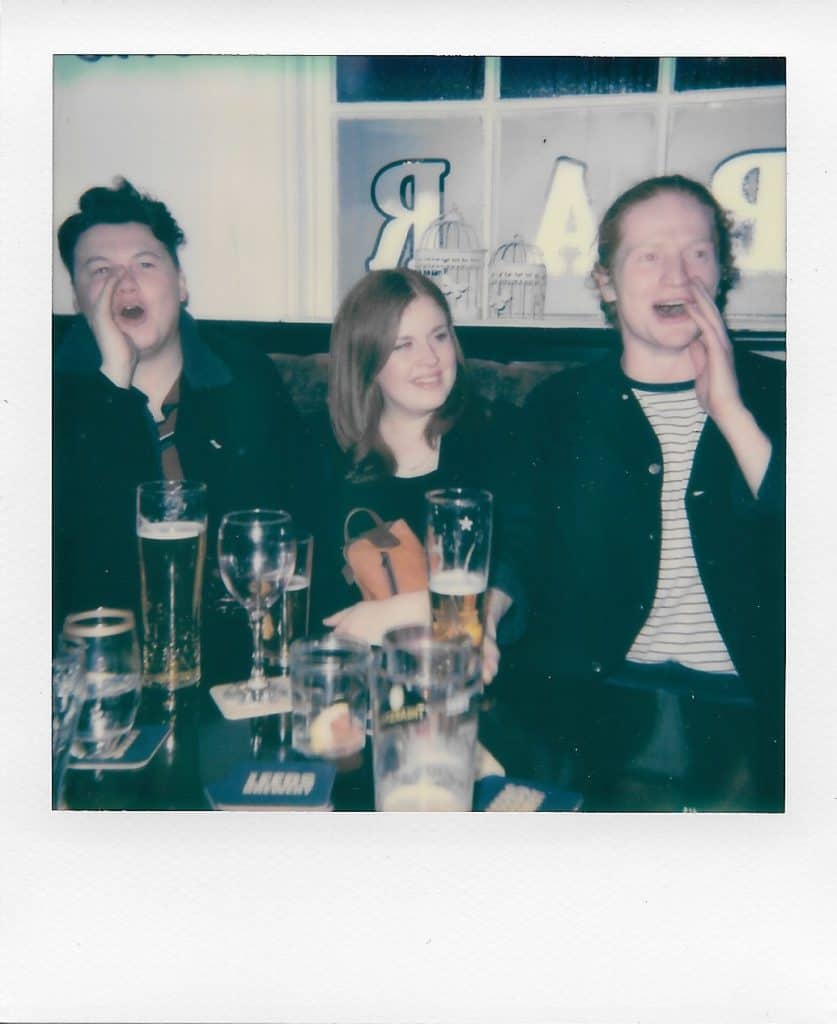 From left to right: Benji, Daisy and Ciaran 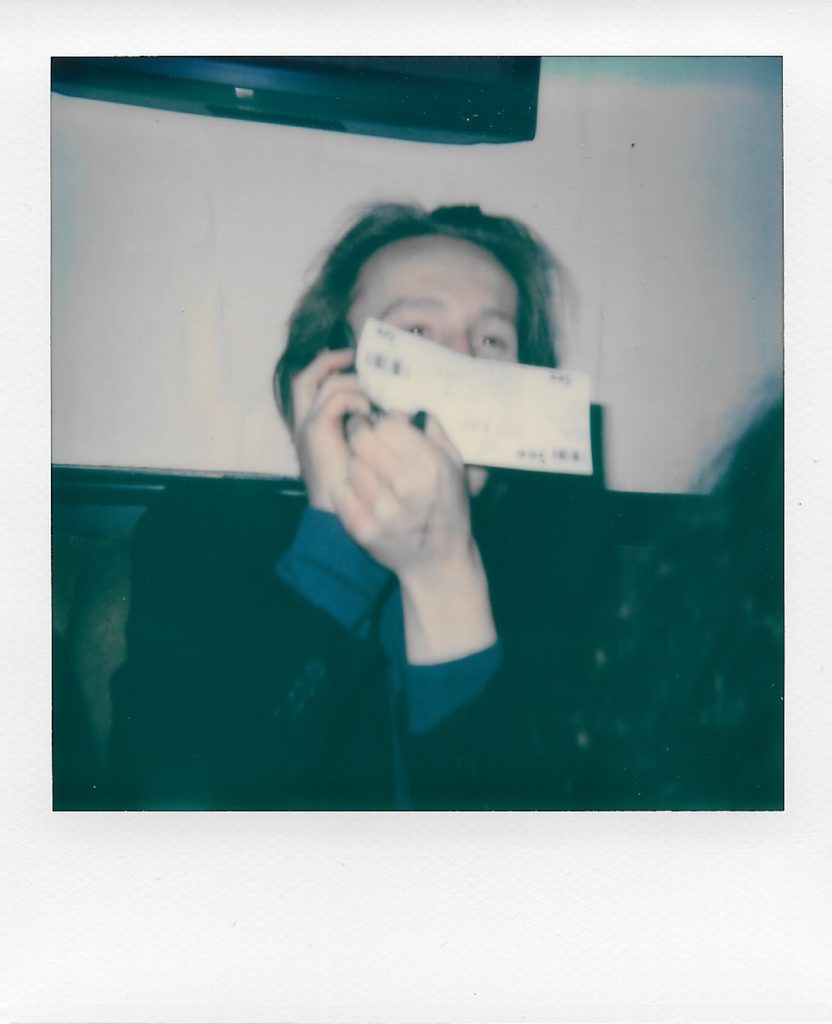 Really can’t remember what Tim was doing, but it was funny!

The moments with Jakes family, the band and their friends are fantastic ones and I should share this special moment at one pub. We were in there with maybe 20 people, chatting, enjoying our drinks and suddenly, oh, how obviously, I hear the beginning of ‘Don’t Look Back In Anger’. This song moves me every time I hear it and this time its very emotional! Every one begins to sing along, I don’t know, maybe we were lifting up the rooftop? After we crashed into several places, danced a lot and drowned loads of beer, Tim, his lovely girlfriend, Paul and me are taking an Uber back home. Home? Yeah, you got that right! Tim and Jake are sharing a household together (with Snowy from Forever Cult as well!) and we will spend the days off in there. Be aware, winter is coming!
Paul and me are going to sleep in the living room this night and after an enjoyable chat we fell asleep.

The first thing that is greeting me in the morning is a fucking hangover. The second is the freezing air. It’s an old house we are staying at and it’s really, really cold in the living room. Paul, I can’t thank your father enough for his sleeping bag, it has probably saved my life! To get back to the hangover! After some cups of hot coffee and a refreshing shower we are back from the dead! I’m going to spend the rest of the day with Paul and we are taking it easy this day. 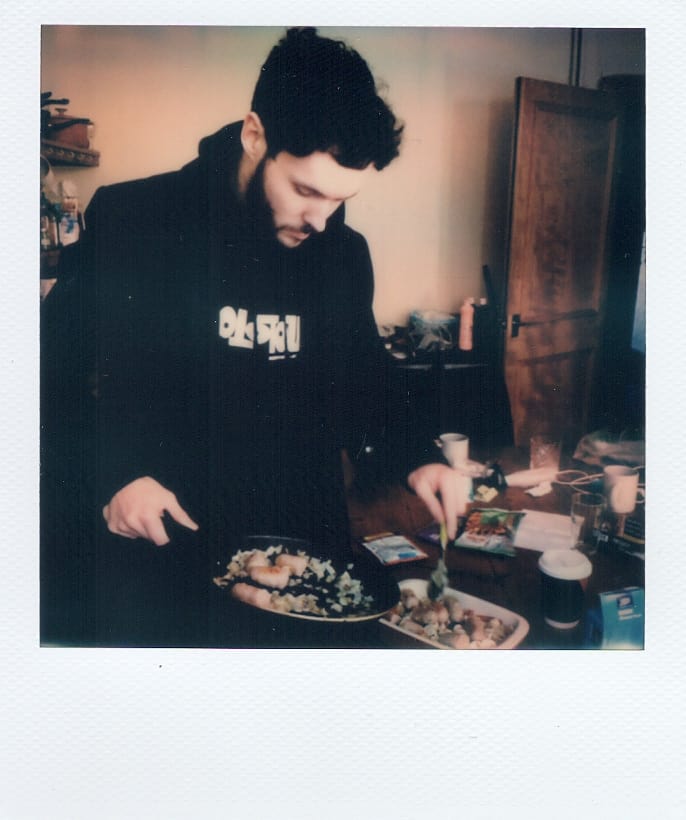 Paul is doing his very best!

The sausage casserole is guiding our way through the first episode of ‘Dark’. It’s a bit weird, because I’m really trying to improve my English skills and then I’m sitting there on a couch in Leeds watching a German series. At least it’s really challenging our minds in the next days, so yeah, you should watch this series too!
When dinner is done, we are taking an Uber again to meet some friends of Paul. It’s a very comfortable way to get from A to B and when we are arriving at the flat, we start hanging around playing some video games and they are inviting me into Kays Good Cooking. Forget Jamie Oliver, have a look at this!

Back at Jakes house, we find the rest of the people staying at the house watching Pulp Fiction. It’s a nice way to end that day and after I’m moving to the kitchen floor (this night Ciaran is staying with us), where its ways warmer, I’m falling asleep pretty fast

The next day is even starting with coffee, some breakfast and Paul restocking the merch. While Jake is out in Brighton to record some drum stuff for another band, we are trying to figure out what to do with the rest of the day. 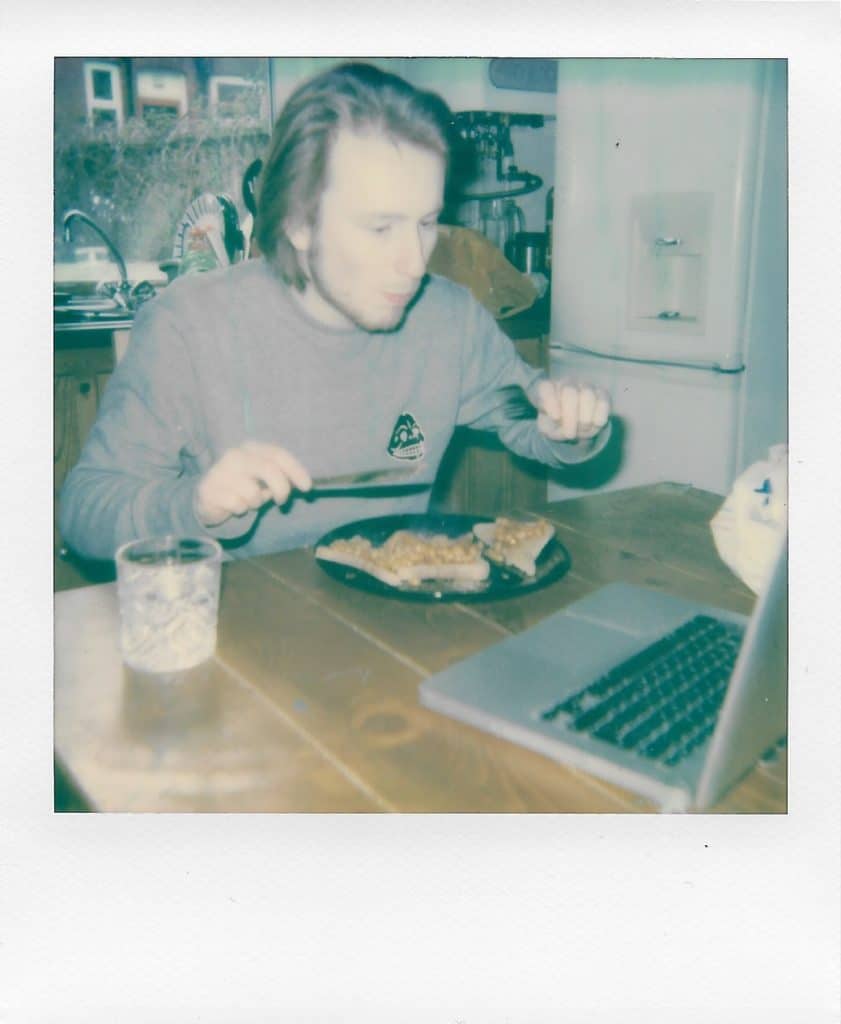 Chesney in his comfort zone.

That’s what days off seem to be like, everyone calms a bit down, you are recharging the batteries, it’s good!
So we decide to go the Bowling centre in Leeds, doing some strikes, having a beer and then we are heading to one of Pauls favourite places in town:
The Brudenell Social Club
It’s an amazing place to hang around, if you are going to Leeds, try it! Of course, we are having some beers going along with a delicious Pie N’ Mash! It should be mentioned, that on this day, Fizzy Bloods live recordings with Bootleg Sessions is aired on YouTube!
Someone has done a really good job in here, so check it out:

This was the last day off in Leeds and we are ending it with some episodes of ‘Dark’, in the still freezing cold living room, Paul in his coat and me in the sleeping bag, while we see our breath condense. What a time to be alive!