I really do remember this summer of 2011. I’m sitting in the car with a good friend of mine and we are on our way to the famous Rock am Ring festival. And that tune from this new, fresh band from Sweden is rocking the car. Because we keep singing it (we hadn’t even a copy of it) and it becomes our song for the festival: Full Steam Spacemachine. And right, Royal Republic weren’t on the bill that year. After this summer I saw them several times live and with the release of Weekend-Man they finally got my full attention. Baby, is there anything left to say?! Then, two years ago me and my sister bumped into Adam after their gig at Große Freiheit 36. We had some Jack Daniels together and we were happy we took that way home. Back to present:
Royal Republic are going to release a new record and they are doing a promo tour through Europe via nightliner. And I’m inviting one of their greatest fans to join me for the interview that takes place in the back of Große Freiheit. What’s left so say? Let’s make way for some questions! 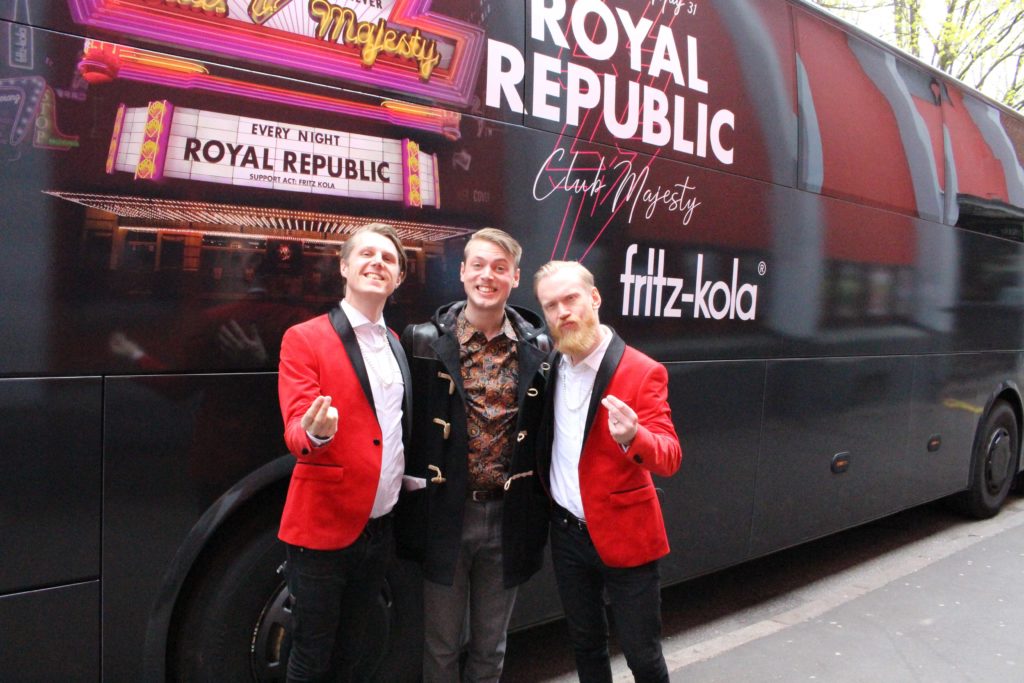 Per and Jonas in front of their huge nightliner

Now Adam picked it up as well. How did that happen?
Jonas: Well, basically we were supposed to do a four part, like a brass section. We had this amazing idea, so everybody got their own different kind of instrument. I had a trumpet, you had a trombone and everybody started rehearsing with their instruments. We quickly realized: ‘Naa, it’s not gonna work out.’ The band is not meant as a brass section.
But Adam …
Per: He really liked the saxophon!
Jonas: Yeah, it reminds him very much of Michael Bolton.
Per: I blew into my trombone twice and I was like: ‘Uuuh …’ Tough! I have a lot of respect for it.
Jonas: The furthest I got on the trumpet was basically Twinkle, Twinkle, Little Star. People can laugh about it. I can laugh about it (and yes, he’s laughing right now).

Did Adam enjoy playing it like in the video, was he doing the same moves in the studio?
Per: I don’t know. I tried to stay away wherever there was saxophone play.
Jonas: He got it during the Weekend-Man tour and every day, before soundcheck, after soundcheck, backstage (Per starts imitating the saxophone part in Fireman & Dancer), on the bus … afterwards I was like: I had it with saxophones.
Per remembers: They were wrong notes in there too (we all need to smirk).
He really stressed it too far, Yeah?
Jonas: Yeah! I think it’s a tricky instrument. But he’s getting there.
Per: Unfortunately (laughing). Maybe he’ll get over it. If he plays it enough. That’s what I’m hoping for.
Jonas: Maybe he’ll be like: ‘Saxophone is boring. I need a new challenge.’ Like nose flute or something.

Bulldog, Anna Leigh, Stop Movin, Can’t Stop The Disco.
These are really savage dance tunes!
So this Club Majesty Thing … is it kind of a concept?
Per and Jonas: Yes!
Per continues: When we started writing, we knew we wanted to do more of the dancy stuff. When we discussed what was good on Weekend-Man, we really said Dance, Kung Fu and Baby. That’s what we wanna do more of. So that’s where we started out. And after a while it just became dancier and dancier. And then back in the day when we formed the band we had three suggestions for band names. The first one was Royal Republic, the second was King Average, which still make me cringe and the third one was called Majesty. But Club Majesty sounded to poppy back then. And we desperately wanted to be a Rock ‘N’ Roll band. Nowadays I’m not sure we are a Rock ‘N’ Roll band anymore. But we rock.
Jonas: We rock! We just can’t be labeled.
Still Rock ‘N’ Roll, we listened to it two hours ago.
I guess I brought one of your greatest fans with me.
Per asks Tore: So what did you think about it?
Tore: It’s really, really great. The part I like the most of your music is that you can just turn it on and listen to the whole thing, especially the first album. And just never stop dancing. It’s just like that. I’m really, really enjoying it.
Jonas: So you heard it for the first time two hours ago. So it must have been like 9 o’ clock or something, in the morning. And you thought it was good? Rocked and everything?
Tore: Yeah, I took the day off to listen to this.
Jonas: Great! It survived another test! We’ve been having prelistening parties as well. The earliest one was at 9:30 and people walked up like ‘Good morning, here is your coffee and now we’re gonna listen to the new album.’ And people were dancing!
Per: After one song I was like: ‘Fuck the coffee, give me a beer.’
Jonas: They turned it to a morning party! It’s kind of cool, we push it to the test to see people still enjoy it earlier in the morning.

When you’re thinking about the fans in Hamburg.
What is really special about them?
Per: I don’t know if there is something about the Hamburg crowd, that makes them different like a lot of other. I feel like Berlin, Hamburg, Cologne, Stuttgart, the German audience is just nice all around. Munich is maybe a little bit special.
Oh, why?
Per: Because they are down south. I live in the south of Sweden and they are special people.
Jonas: That’s why I moved a bit north. Too many special people.
Per: No, but I really like to play Große Freiheit. We’ve been there several times, I like the balcony. Last time it was a special show. I’m not sure was it the Hamburg audience making it special and how much was this making it special. Now we dont’ get to play here. We outgrew it.
Jonas: We’re too big. Aah (moans very sad)!
Per: I would still do five nights of Große Freiheit.
Jonas: That would be easy. And also because that means you get a hotel instead of getting on a nightliner. More porn (everyones laughing)!
Still Jonas: But to make Große Freiheit very special: On the previous album Weekend-Man, a fan wrote a really long letter about how much he appreciated the music and everything and one of his favourite songs was Amercian Dream. And he really begged like: ‘Could you please play it?’ So that was the first time. I would say it was …
Both: The only time …
Per: We played this song live.

One more time relating to your upcoming record.
Anything you want to say about it, but no one asks it?
Jonas: Oh, thats a good one. Aah, nobody asked us about the stripes! I think it’s on the back cover. The scenery and the pictures from us.
Per: Yeah, the neon stripes!
Jonas: It’s made here in Hamburg.
Oh, really?
Per: Yeah, right up the street, right up Reeperbahn.
Jonas: In the beginning of Reeperbahn.
Per: There are these neon stripes on the wall. That’s were we shot the picture and then we just extended the stripes digitally. All the press pics are shot in and around Reeperbahn. When we did it for Weekend-Man, ’cause we hate photo shoots, we suggested doing it drinking in Berlin and then we bring a camera man. And we sang karaoke, that’s how we got all the pictures for Weekend-Man. And then this time we were like, lets bring it up to the Reeperbahn and do the same thing.
Jonas: So Hamburg is special! 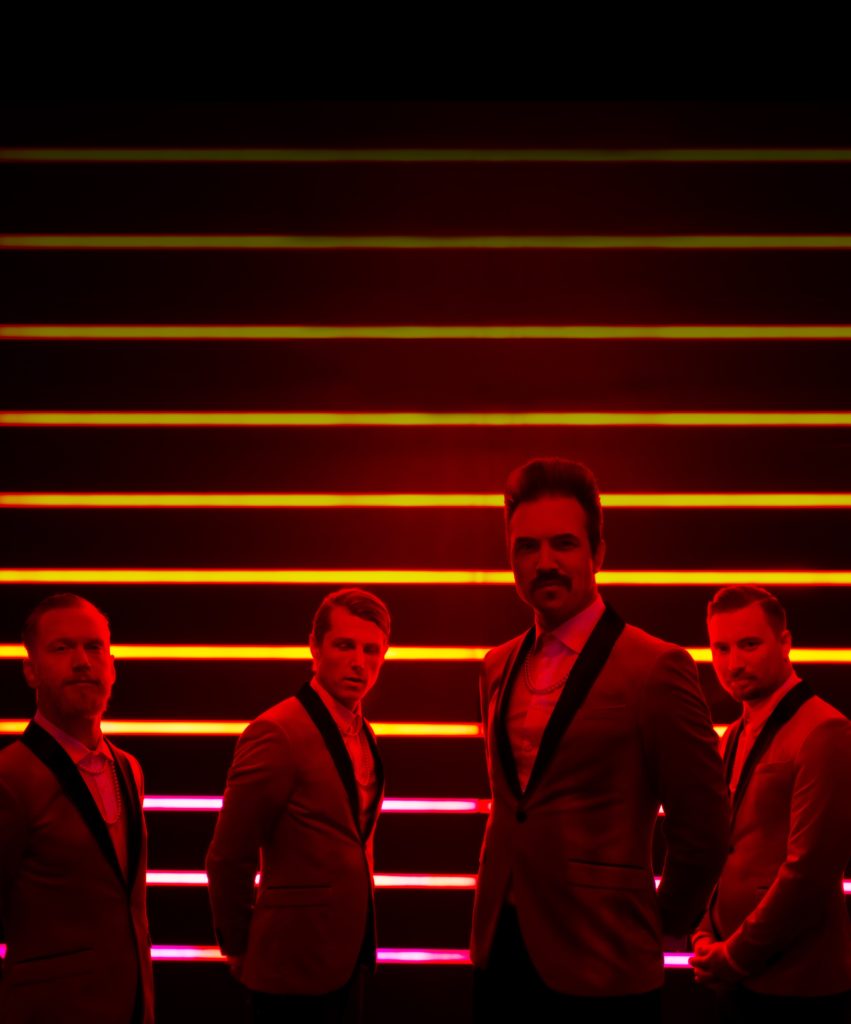 You’ve been the Weekend-Man. Now you turned into a Fireman & Dancer.
What will come next?
Per: Turn into a woman named Anna-Leigh.
Jonas: Yeah, something like that. We’ve been astronauts, we’ve been Weekend-Man.
Per: It’s time we turn into a woman, really.

That’s the reason you are wearing these pearls?
Per: No, that’s very manly. Pearls are very manly. Women commented on it like: ‘That’s a girls thing.’ I don’t know if it’s because the guys don’t see it, because they are like: ‘I can’t look at that’. But I think more men should wear pearls.
Jonas: Yeah! It looks cool!
Per: It looks cool!
A suggestion for the crowd at Sporthalle?
Jonas: Yeah, everybody wear pearls!
Per: A lot of people are gonna fuck off their pearl necklaces. And then there are gonna be these tiny rolling balls on the floor.
Jonas: Like: ‘Man, they are really dancing!’
Per: ‘Wow, that dude just backflipped (laughing)!’
Jonas: ‘And landed on his neck, but he is still alright! Keep on rocking!’

Most important and the last question:
Star Wars or Star Trek?
Jonas: Star Wars!
Per: Yeah!
Disappointed by The Last Jedi?
Jonas: It was alright, but for me Star Wars is nostalgia and with The Force Awakens they were playing very heavy on the nostalgia string. It’s basically the same story all over again. But with a more modern touch on it. Like the death star is bigger, it’s a planet now, a death planet! It’s the same thing.
Per: I really liked the first one. I really enjoyed it. I really enjoyed seeing the whole thing again. But I thought: ‘You really don’t need to tell the story.’ The second movie had some kind of a unique vibe to the story.
Jonas: But it was kind of cool, the episode of Star Wars in between regarding to how they built the death star. And now it was with Han Solo, the beginning. I haven’t seen that one yet.
It’s a good one. Really! You should watch it!
Jonas: Yeah, alright! But it’s kind of cool, because there was this big gap in the story. So Luke can just go in there, drop a bomb and the whole planet goes boom?! But they fixed that 20 years later. This is why he was able to drop the bomb. Mads Mikkelsen was the engineer there, he was a complete genius: ‘I’m gonna leave one tiny loop hole in this massive death star. Just drop a grenade and everything goes out.’
Per: And Vader is like (Jonas starts imitating Darth Vaders breathing): ‘Are you sure that you didn’t leave any backdoors or traps, like a grenade in the right place could be …?’
Jonas responding in a happy voice: ‘No, it’s all good.’ But it has always been Star Wars for me. I never got on the Star Trek train.
Per: Me neither. It’s a television series.
Jonas: I just know this.
Per: There is a band called Spock! That is a synth band from Sweden! They have amazing hits like: Never Trust A Klingon. They are really cool! What was the other one? (Starts singing) Alien attack, they want their planet back (Jonas joins him). Never ever trust a Klingone. You will always regret. Everyone check out Spock!
Jonas: But we are Star Wars fans!

Thanks to Per and Jonas and have a happy release day!
And now like Per said: Everyone check out Spock!

50 years of Stairway To Heaven

Little Did They Know