7 nights of hard drinking, good looking girls and a lot of fun! We love Barcelona to bits!

Tom Allan about the shoot of ‘2 Fingers Up’

We first met Tom and Evan (aka The Strangest) at the Clouds Hill-Festival 2017 in Hamburg, where they played a fantastic set of their songs which will be released on their debut album later this year! Both are true rock’n’rollers from head to toe and what’s left to say? We totally fell in love with both of them and of course – with their music! So we arranged a date at the Silbersack, the famous pub at the Reeperbahn in Hamburg to talk about Tom, the guy who grew up in a small town in the east of England, and Evan, the guy from Mexico City, who together form „Tom Allan & The Strangest“. Things didn’t go as planned, so we acted on impulse and decided to do a smart live-interview via Instagram, streamed right from the Silbersack itself and to do the propper interview at Clouds Hill’s (Tom & Evan’s record label) appartement, the next day. Get a glimpse of our afternoon at the Silbersack and yeah – enjoy! 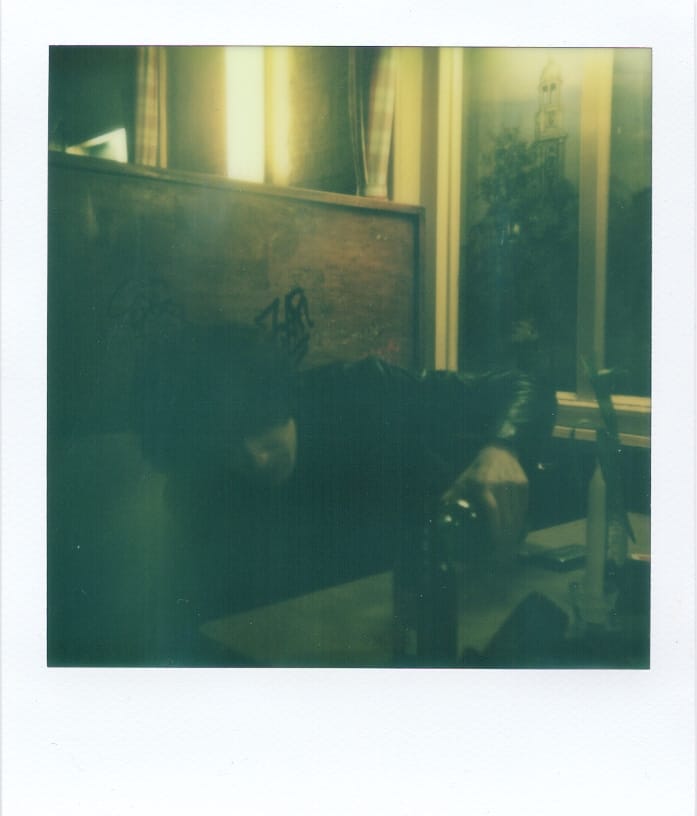 Tom is pouring us another shot of Hansen’s Saurer at the Silbersack. 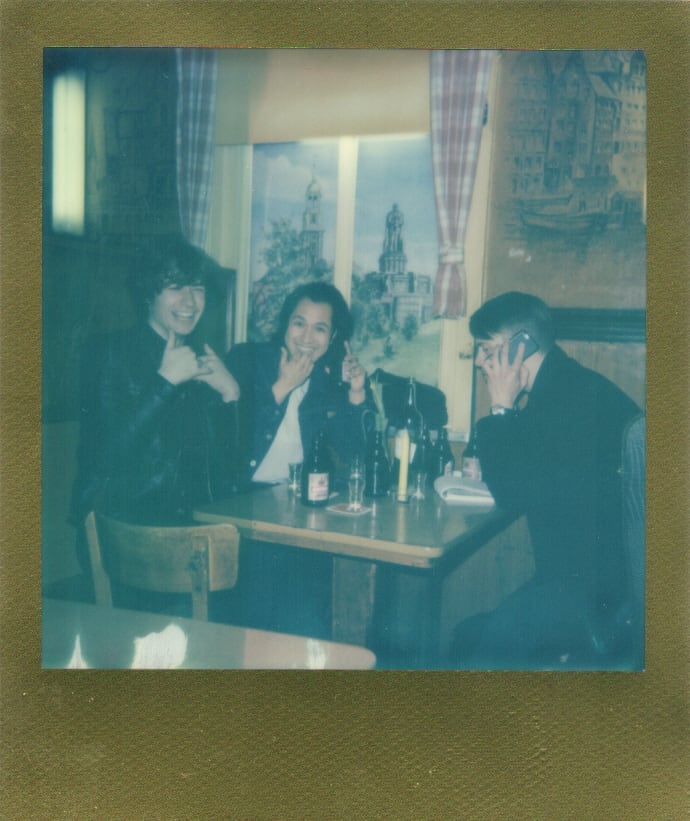 From left to right: Tom, Evan and quite ‘busy’, myself.

So, as I asked you yesterday:
Who are Tom Allan & The Strangest and what it’s like being you?
Tom (speaking to Evan): You had a really cool answer yesterday!
The Strangest: What did I say?
Tom: I can’t remember. But it was good.
The Strangest: Fuck! It was something like: Sometimes it’s great and sometimes it’s shit. It’s like a fucking rocket going to the sky or something like that. And he (pointing towards Tom) is always there to catch me, hopefully I’m there to catch him, you guys saw it yesterday.
Tom: Wasn’t there something you said like: It’s hard being sexy, but someones got to do the job?
The Strangest: No, being sexy is a nasty job, but somebody’s got to do it.
Tom: But I’m tired of doing this.
The Strangest: I tell you: It’s strange. It’s great. Because it’s very weird you know? You get both extremes. Like, one day you are recording in a fucking unbelievable studio and the next day you have nothing to eat at home, in your fucking 21qm flat.
Tom: And the other half doesn’t even have a 21qm flat (we are laughing along)!
Homeless boy!
The Strangest: But, you know, you also get one day being in fucking Barcelona eating, drinking whatever you want in a great flat and not having to worry about anything, but I don’t know …
Tom: Come on, it’s fun being uns! Let’s face it! It’s good, fun! 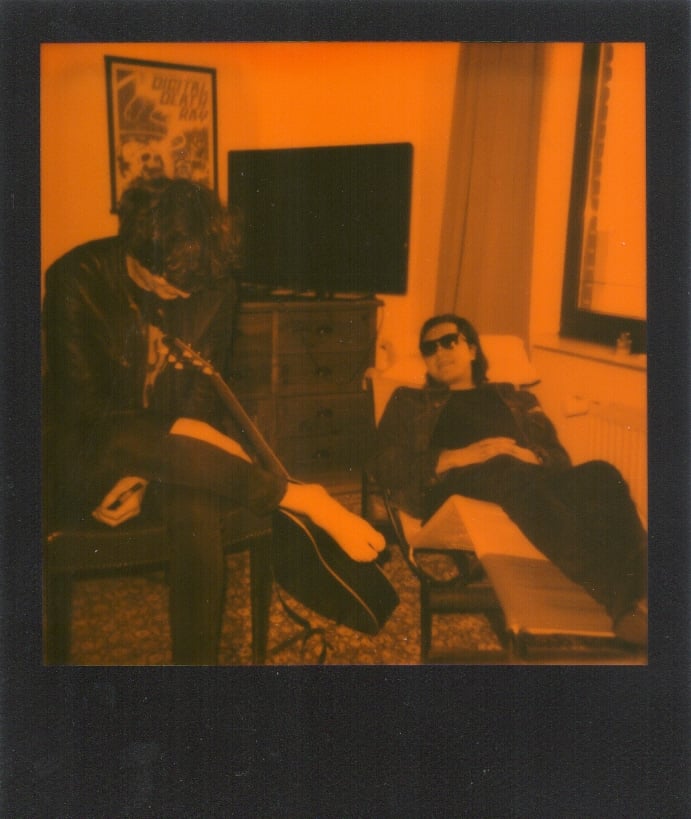 So what do you want to say about your forthcoming record, called ‘Dear Boy’?
Tom: Dear Boy, yeah! What can we say about it? Just listen to it, enjoy it and make your mind up if you like it or not … if it make sense to your brain or not. That’s all we could do: We gave our best, we are proud of it, we are very proud of it! If you like it, cool!
The Strangest: Yeah, and I thank the people who were involved in that, it was great! If you don’t like it, you have a bad taste in music!
Tom: That’s all we could do, we are proud of it, we gave it our best shot.

Hopefully it’s enough … I guess so!
There is a song on your record, ‘Walks Like Chaplin’, do you want to tell what the song is about?
Tom: The song is about a drug addict, who I worked with ’cause I worked in this drug help centre. He walked like Charlie Chaplin, he also had this really cool deep voice and one day someone turned around and said: Yeah, he walks like Chaplin and he talks like Bond! And I thought this was a great inspiration so I wrote a song about him.

So, you are full-time musicians, but do you have any other interests besides music?
Tom: Girls.
The Strangest: Drugs
We are laughing.
Tom: No, … Pinball!
The Strangest: Yeah Pinball, Pinball is great!
Tom: Not much to be honest. If we go out, it’s probably because we are off to jam sessions in Cologne. Music takes up all our time actually, doesn’t it?
The Strangest: Absolutely, yeah! Everywhere we go, we usually have an acoustic guitar and I don’t know, we wake up and first thing we see is, like a fucking guitar and we want to play it! And maybe it’s annoying some times and you have to come down a bit but … also recording! Besides our music-recording other people! I also enjoy that, working in this music studio in Cologne.
Tom: True, that’s one!

When we met after your perfomance at the Clouds Hill-Festival, you covered different songs, for example: ‘Stand By Me’, ‘Don’t Look Back Into The Sun’. Which song do you like to cover the most?
Tom: It depends …, it’s a different one each day. One of our favourites at the moment is ‘Overkill’ from ‘Men At Work’. Because we think, Colin Hay has written some really good tunes.
The Strangest: There is a song, we’d like to cover, but probably … well it’s coming up hopefully.
Tom: Yeah, from ‘Fleetwood Mac’.
The Strangest & Tom: ‘The Chain’.
You told me about it yesterday, yeah?
Tom: I think so.
Or was that another ‘Fleetwood Mac’ song?
Tom: No, it could only be that one, I suppose. But we would love to do that, but the thing is, the guitar parts are really intricate. 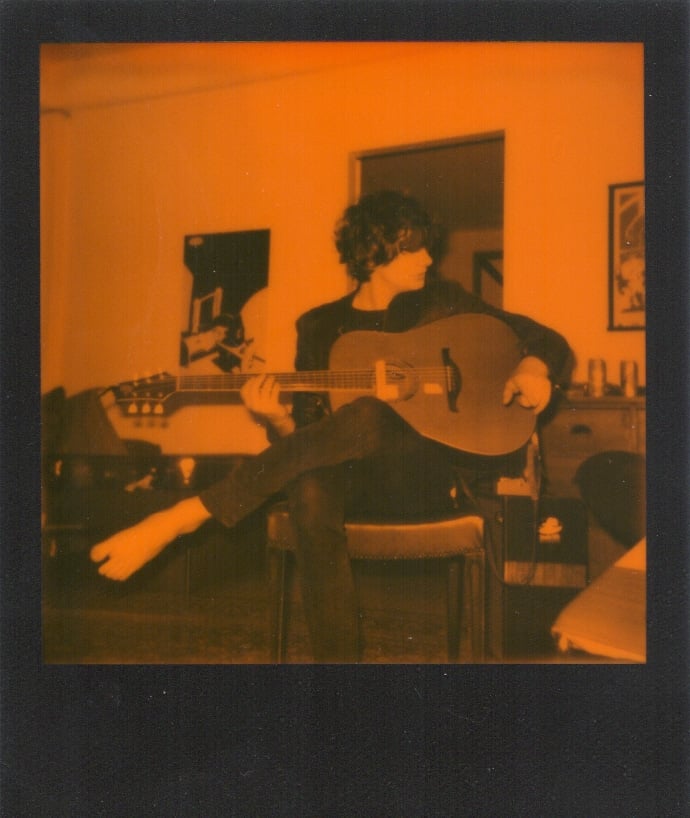 Tom is showing some of this parts on his acoustic guitar.

The Strangest: So yeah, ‘The Chain’ is a great song, great cover.
Tom: We’d like to do that one, certainly.

Now that we are talking about other artists, which concert would you have really wished to have been at?
Tom: No matter what time?
No matter what time.
The Strangest: I wish I could have seen ‘The Doors’ live.
Tom: Obvious one.
The Strangest: They inspired me greatly, ‘The Doors’, what about you (pointing at Tom)?
Tom: I would probably say a ‘Sex Pistols’ gig. In their prime, like 1976 or so. Sex Pistols!

The next one should have been a question for the Silbersack, but anyway, imagine a working jukebox in here, which song do you think should not be missing in a jukebox?
Tom: I once put a coin in a jukebox in London because they had ‘Beastie Boys’, ‘Sabotage’ in it.
The Strangest: Yeah, you think that one?
Tom: But it’s not a pop song, is it? We need a pop song! We could say Billy Joel, ‘Piano Man’, because that is the pop song to me!
The Strangest: We could also say some ‘Oasis’ …
So, Billy Joel or Oasis?
Tom: ‘Oasis’ would be too obvious. Let’s go for Billy Joel ‘Piano Man’.
The Strangest: Yeah, here we go.
Tom: That is the pop song and I bet it would work really well at the Silbersack!

In the last couple of years some very talented musicians left the stage of life. We heard some songs of theirs yesterday at the Molotow, Tom Petty, Scott Weiland, Chester Bennington, Lemmy Kilmister, …
Which death did shock you the most? 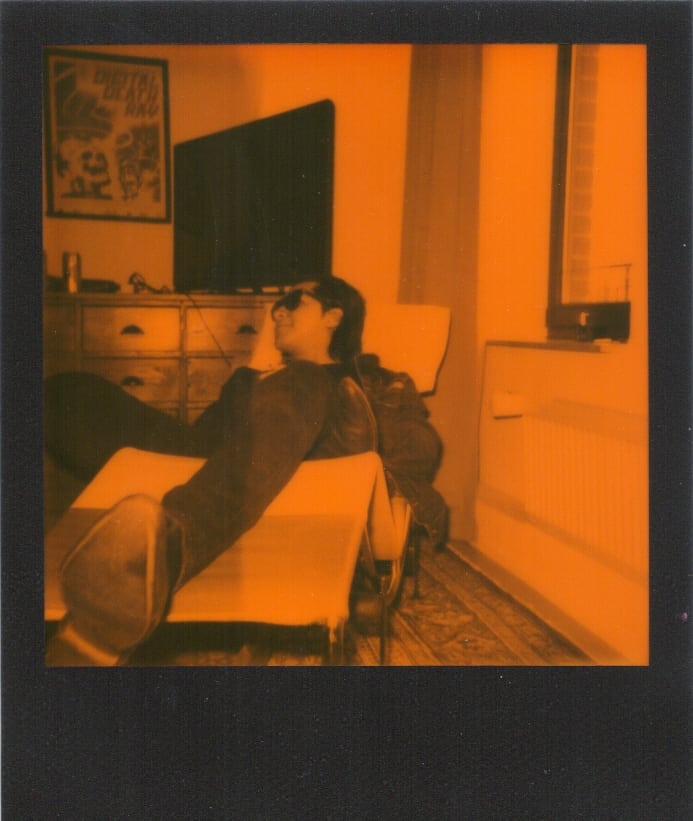 The Strangest: David Bowie and also Chris Cornell. Chris was a great fucking singer, he had a great voice, he was a good songwriter and I love everything about him, he was great! And it was shocking, because, you know, he never really showed any signs.
Nobody would have thought that he’d commit suicide.
The Strangest: It never crossed my mind, that’s for sure. Most of all, he seemed to be wise and mature enough to, you know maybe … I don’t know what situations people are in who commit suicide, but that was unexpected to me.
Tom: I guess I would have to say- it’s an obvious one-but I will say David Bowie. Because I thought the second last album he did-the thing is called ‘The Next Day’-It is absolutely amazing! That was his comeback album! And I honestly thought: ‘Wow, shit, he’s still got it! He’s still got the attitude and the power and everything.’ It’s my favourite album of his.

The last question and I also asked it yesterday:
Famous last words?
Tom: I said ‘Don’t Look Back In Anger’ and I’d like to stick to that.
The Strangest: Yeah?
Tom: No, no, no, stop! I’m gonna rethink this one. ‘Choose life!’
The Strangest: ‘You can not burn out if you’re not on fire.’

Thank you for an amazing weekend! 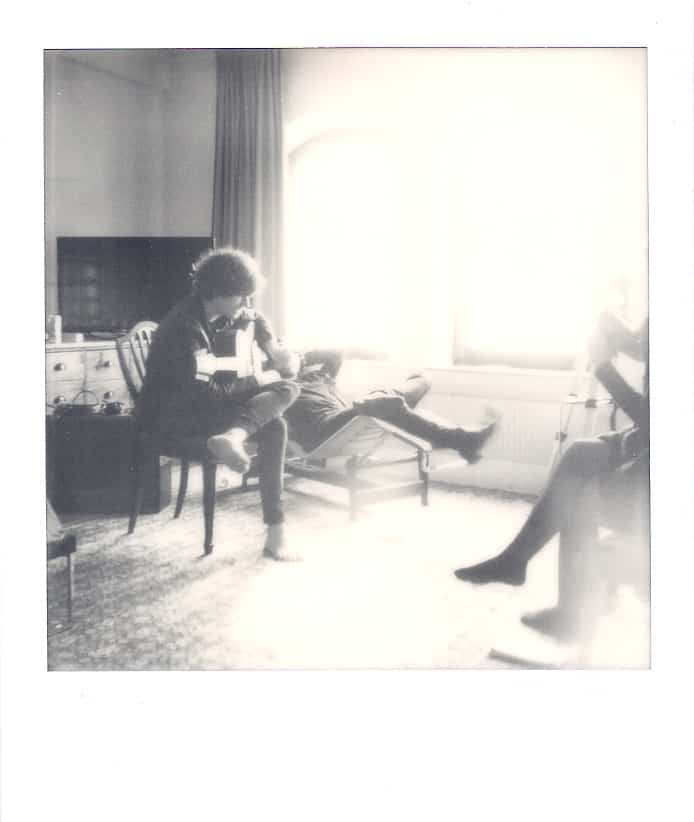