Before Jules and I watched the fantastic set of ‘The Strumbellas‘ at the Mojo Club, we sat down for concert-news with Dave and Izzy for a quick chat. What did we talk about? Nearly everything! I really hope you are going to enjoy this one as much as we had!

Hey, how did you spend your day? I guess you just arrived today?
Izzy: Yeah, we got in this morning, we slept in, and Darryl, Jon and I went for a run on the river and walked around town a little bit, but we were relaxing and exploring, but nothing to excited.

So, you did arrive in the morning …
Izzy: Yeah, we arrived about ten this morning.
Dave: Yeah, Izzy is in the two clubs of the band, there is the Strumbellas adventures club and they like to go on hikes and see things in the city and there is the Strumbellas running club and I’m in neither of them (we are beginnig to laugh). I’m very happy about this, but Izzy is very active.
Izzy: Yeah, I’m always like: We’re gonna do something, let’s do something fun!
(Talking to Dave) So you are just relaxing.
Dave: Yeah, I work on some other projects some times and sleep in sometimes.
It’s fine, it’s tour life, you can do whatever you want!
Izzy: Exactly! 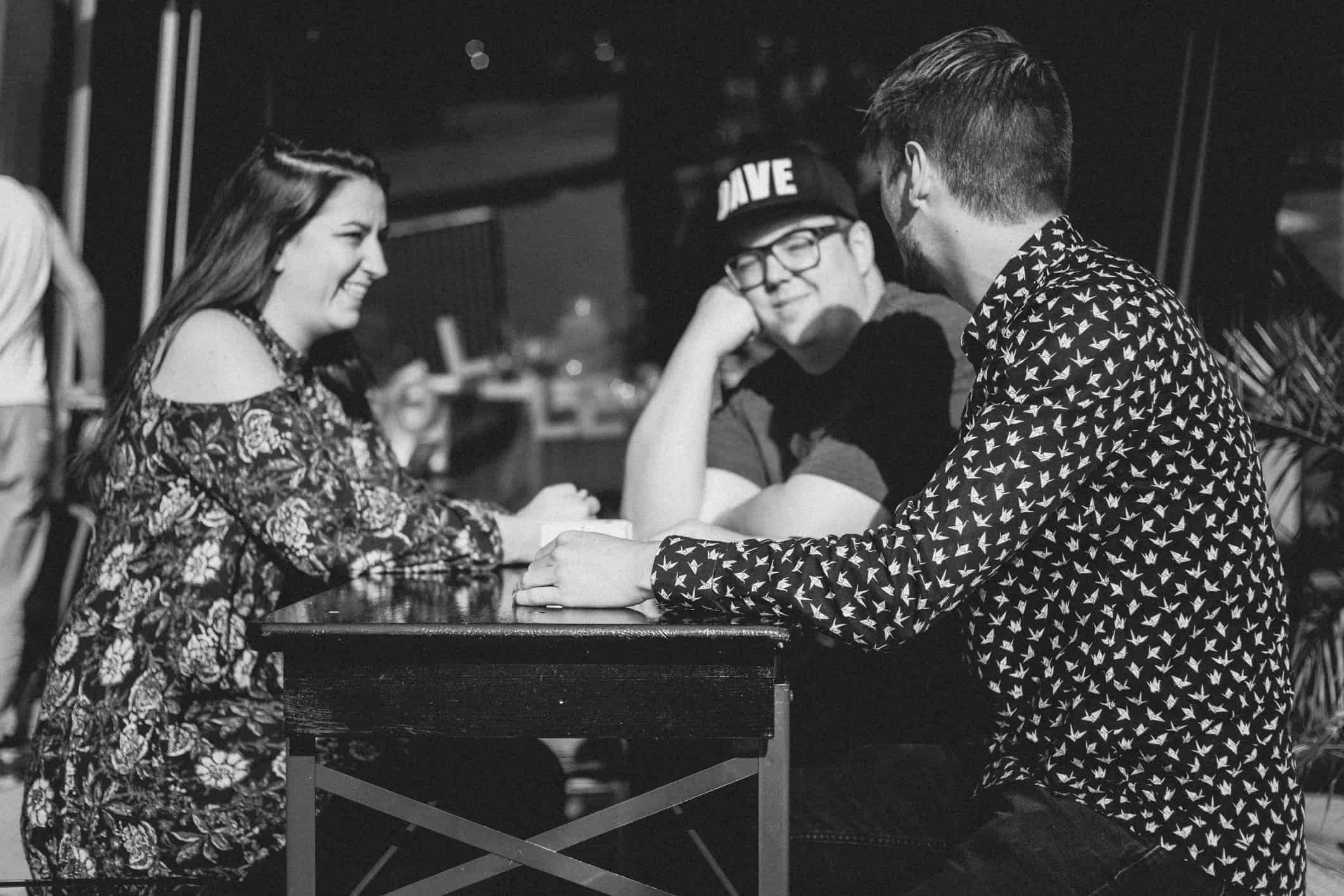 Okay, yesterday you played in Leipzig. How was the gig?
Dave: It was great, we played the city a couple times, so it was nice to be back. It’s one of our favourite cities, so yeah, it was really fun!

What do you expect from the audience tonight?
Izzy: Oh, it’s a great venue, I mean, just having soundchecked and walked around, I think its gonna be really fun! I think there is gonna be like great energy, because it’s last show of the tour, so everyone is really excited and hopefully there will be great energy from the crowd too and we can have a fun party! And it’s Friday night, so everyone will be a little more relaxed maybe (laughs).

Okay, you said it, this is your last gig in Europe tonight! And then you’ll go back to Canada! Whats different between the audience here in Germany and over there in Canada? And are you looking forward to come home?
Dave: We find the audience is here very respectful. So sometimes the audience in Canada is rowdy or drunk or chatty, which is great! I mean we love our Canadian fans and thats sort of what we expect from a crowd, cause we are a Canadian band and its fun to be in that kind of energy. But then come to Germany its like a very cool sort of vibe as well. Because during songs fans are very quiet. When we first came over here, we thought: ‘Oh they don’t like us, or they not excited or having a good time’, but it turns out, they just like to listen, they just like music! And they just like to listen so yeah, it’s a different experience, but it’s one we like! 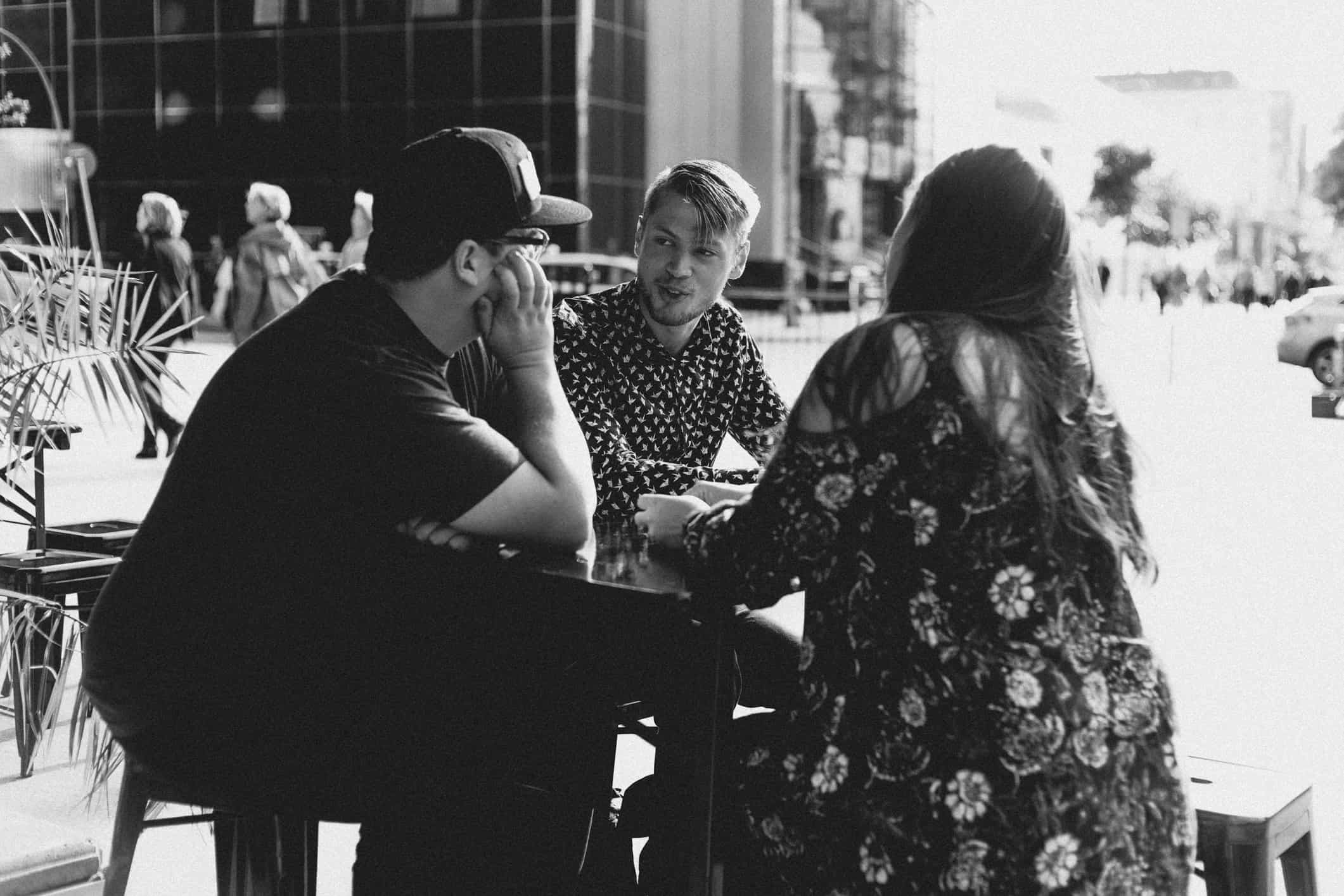 You released an EP in 2009 and three records in the last five years. Did you notice some milestones in your career, like the release of ‘Spirits‘. It was a big explosion here. Do you have some things like ‘oh, that was that’ and ‘wow’ or ‘then things got bigger’ …?
Izzy: I think so. I think to start of and even from the first milestone might be you see someone in the crowd singing to your music and you don’t know them (starts to laugh). So then your struck! I think our first album release that we sold out it was only maybe 150 passing in venues, sold it out. and then kind of actually with every album release you know. Oh, now before we were only played on public radio in Canada, and now on Rock radio. And then we sold out another 150, then 500, then 1200. Working away through your hometown, where you know the radio stations, you know the venue sold out, you can really see that, that was full. And then obvious experience, blowing up, especially for us in the US and in Europe, where before we played venues and no one would be there and then you come back and there’s great crowds. It’s a big difference
I guess it’s fantastic to see the progress!

What do you think about the fact that ‘3 Doors Down’ performed at the Trump inauguration?
Dave: I think someone had to perform at this thing, I’m not really sure, what to say. As Canadians we don’t necessarily, we are not as connected to what’s happening in the US as our friends in american bands are, we have Justin Trudeau as our prime minister, thankfully. So we are not as connected to it, but I’m not sure what to say, guess somebody has to perform. 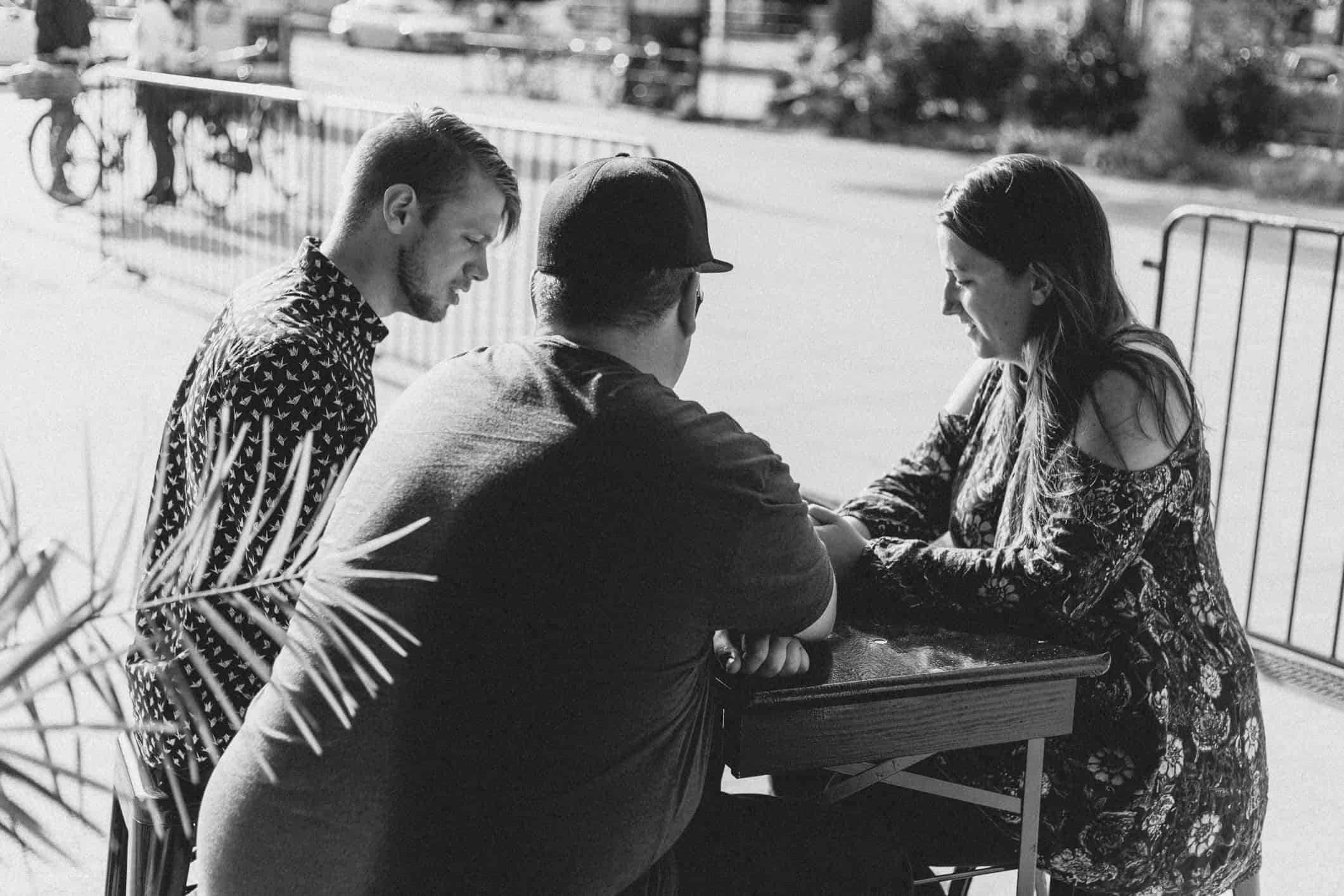 Before you both dived into the musical adventure called ‘The Strumbellas’, what did you do and how did you meet Simon Ward?
Izzy: We both met Simon on ‘Craigslist’. We were the first two people who respond to an add Simon put on ‘Craigslist’. Do you know what that is?
No.
Izzy: It’s like an online advertising.
So it’s a bit like what happened with ‘The Killers’, but only that it was in a newspaper?
Izzy and Dave: Yes!
Izzy: It’s like the online-version of that. So it’s like, Simon posted: Looking for band members and he linked to his myspace page, cause this was nine years ago. So we responded and … I have lost track of the question.
Dave: How did we meet. Yes, we responded to this add and we were two of the first people to respond. There was tons of people in the beginning. I think there was maybe, at the first rehearsal, there have been ten or twelve people and slowly it got smaller from there and we added people from Simons hometown, a small town in Canada. Yeah, and thats how we became the band we are today.
That sounds easy.
Izzy: Needed nine years of progress.
Dave: And before the band I was doing a Ph.D. in English literature and you were doing …?
Izzy: I was working in like cartography and like economics I guess. So I worked in yeah, very different things.

So you changed into completly different lifes.
Izzy: Yeah, totally. We all sort of had our own separate careers and this was all about a side thing or hobby and then slowly the band shifted. So Jon was a journalist, Darryl, our bass player had worked in the golfing industry, Simon was a teacher and Dave was in school, so we all had our different things. And slowly we all shifted to doing music full time for the last few years.

What is your next project with ‘The Strumbellas’? Your last album was in 2016 …
Dave: Yeah, we are working on the next album, slowly, so you know, nothing to advance right now, but we are picking new songs and try to find time to record if we can. 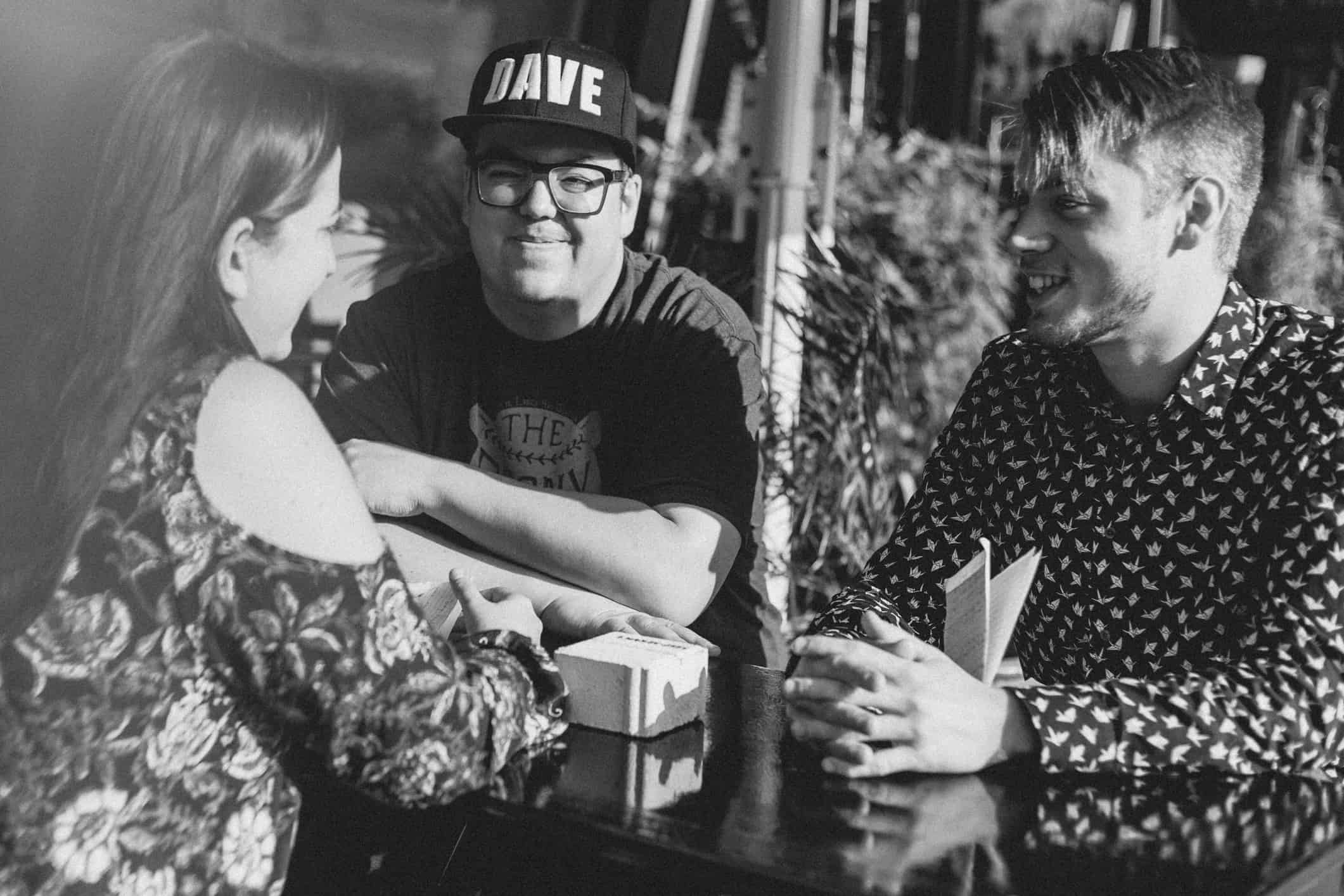 We are at the last question, at last but not least!
It’s Star Wars or Star Trek (everyone is beginning to laugh)?
Dave: Well, I think, as a band we probably have to be Star Trek. Because our guitarist …
Wow!
Dave: Like I’m Star Wars, personally.
Izzy: I’m Star Trek personally (we are laughing again).
Dave:  Our guitarist is such a big Star Trek fan. I think he probably takes the band. He’ll tell you things about…
Izzy: ‘Oh, this one is good. Which Star Trek are you talking about?’
Dave: ‘Yeah, which season? The next generation?’ He reads the novels that go in between the movies, so yeah that means, that ‘The Strumbellas’ have to go for Star Trek.

Wow! That was fun!